Our 30th Post: Featuring The "Final Gasp" of "Yank and Doodle"

Friends, please pardon my touch of melancholy. For, you see, I am betwixt the devil and the blue deep sea. I'm in a terrible quandary.

As you might surmise well, my beloved panelological treasures have yet to surface. Despite a tri-state dragnet of all comic book shops, thrift stores, and whatnot, the heisted boxes--all easily recognizable by their careful codes, written in bold laundry marker--remain in limbo.

I am consigned to the small but potent stack of panelological gems that remain in my hands--under the ever-watchful watch of "Sparks" Spinkle.

I am, however, closer to the truth than I have been thus far. Two potent clues came into my possession this past week--clues that have spurred me out of a nearly month-long "fonk" to write you, my dear friends, another missive.

Perhaps you may recall the unwelcome presence of a foppish flibbertigibbet named "Raydon?" That glad-handing rascal has appeared twice this week at Dorrie's Diner--each time with a coterie of similarly gaudy (and grating) companions. Dorrie made their first visit "on the house." I forbade such mollycoddling on their return, two days later.

"Raydon" and his comperes paid the bill without hesitation. He complemented me on the "fine upkeep" of "his" bistro. (As you shall recall, the young strumpet "designed" the premises of the Diner, to the unending delight of "the missus." Thus, your reporter has been obliged to "keep clammed" about his two cents' of opinion.

How I detest the purplish hue of scarlet that adorns the Diner's walls! I much prefer the classic "tomato red." Some days, the sight of that nearly-purple red is enough to put me in a foul mood, even if I am otherwise chipper and cheerful.

A half hour after his entourage departed the premises, I conducted a routine sweep-up of the area near the cash register. On the ground, I found a curious thing: 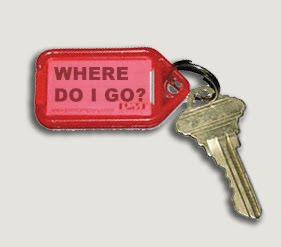 The next morning, as I went for the daily newspaper, I found Post-It Notes stuck all over my car, the driveway, and our mailbox.

On each of the notes was the number of one of the purloined boxes of comic magazines! P23! B17! Q02! K59! And so on. Each scrawled note sent a new chill down my spine. A quick reference of my Master List (which resides in a series of three-ring binders) confirmed that all 37 of the Post-It Notes corresponded with one missing box of comic magazines.

And then, this morning, the greatest shock of all. Stuffed inside our Sunday paper was my copy of Prize Comics #68. Not a particularly lustrous item--it was the final issue of the series, before its dire conversion to a Western comic magazine. I have a complete run of the original 68-issue Prize series--or, rather, I had a complete run.

It was indeed my copy--it bore my mark on the front inside page.

Someone in the know is teasing me with these clues!

Most curious of all was this piece of note-paper, tucked into the comic magazine, right at the start page of today's panelological offering: 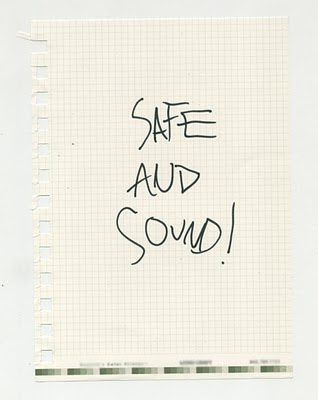 This note appears to indicate that the comic magazines are unharmed. But who wrote it? And, most importantly, who crept in the pre-dawn hush to insert note and magazine both into our Sunday newspaper?

Just to acknowledge a new play in this intellecutal chess game, I shall endeavor to present the very story the thieves marked with their naughty note! Here, then, is the final appearance of the heavily-buttocked teenage crime-fighting duo, "Yank and Doodle." You will note that, although the logo boasts that the series is "STARRING The BLACK OWL," that he does not appear until the last panel, and most certainly not in his action togs. 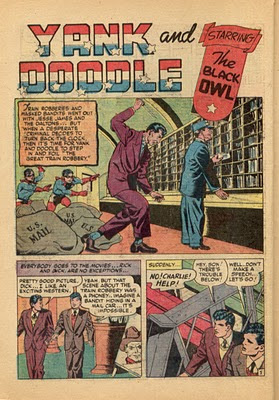 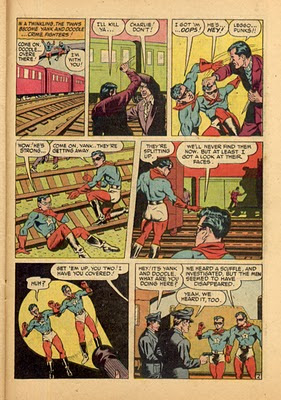 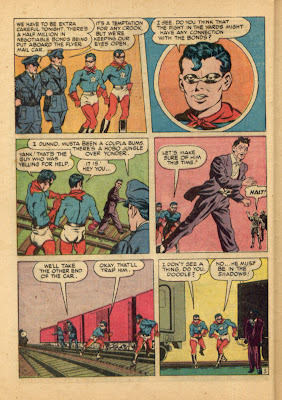 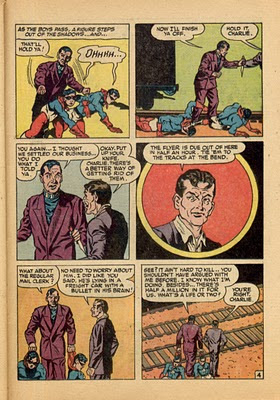 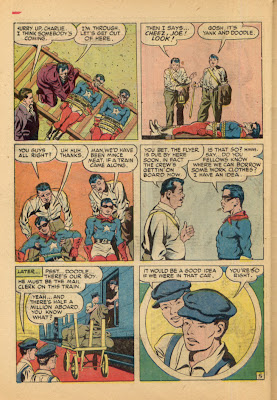 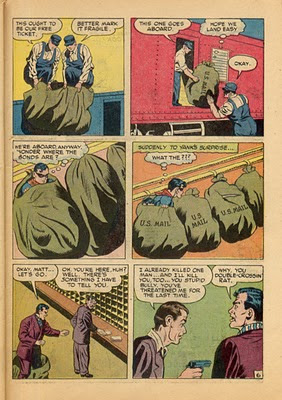 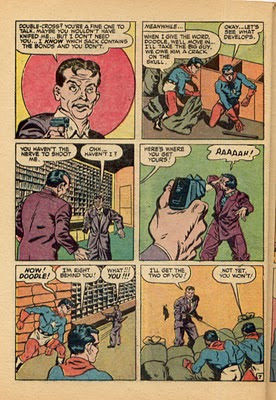 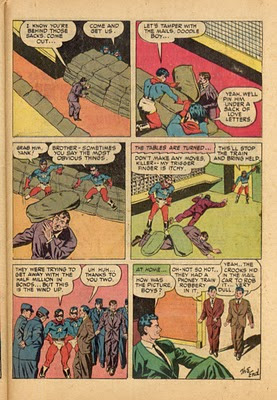 As you may have anticipated, there is a sad and curious story about this story. Like many of the last "Yank and Doodle" pieces, this was written and drawn by a shadowy figure of the late "Golden Age" of panelology--Sheff Rutledge.

Rutledge was a painter and illustrator who struggled to find his footing in the world of the comic magazines. His first published efforts were in what were called "he-men sweat mags--" hyper-masculine adventure pulps with such titles as Turgid Youth, Throbbing Male Action and Sweat-Soaked Man Tales.

These magazines would probably be termed as "home-erotic" by today's standards. They catered to a presumed audience of masculine men who wished to read--and see detailed illustrations of--stories about other masculine men. This trend ebbed with the onset of World War II.

Some of the titles, having a small but loyal readership, struggled on through the 1940s. Seldom were they found on news stands. Their readership was almost 100% subscriber-based. Sheff Rutledge was the star artist of this little-known genre.

As the size of these magazines shrunk--to conform to stringent wartime postal regulations--their content became more tawdry and suggestive. Rutledge soldiered on, painting and drawing ever-provocative pieces for the likes of Steel Piston Adventures, Man Cannon! and Army Buddies After Hours.

On the side, Rutledge wandered into the margins of the mainstream comic magazines. He was a great admirer of the works of Joseph Simon and Jack Kirby. One can easily see their influence on Sheffield's page layout, and even in his drawing.

Where Rutledge departed from Simon and Kirby was in his lush, lovingly detailed renditions of the male "keester." This was considered taboo territory in the comic book industry. As early as 1940, accusations of a hidden "gay" agenda had been hurled at comics publishers. Artists such as Louis Fine, George Tuska and Reed Crandall certainly glorified the male physique in their panelological renderings. But there was no "agenda" in 1940s comic magazines to speak of.

Nonetheless, Rutledge's attention to details--not only in the rear ends of his heavily-muscled heroes, but in their "below the belt" region--brought some minor scandal to the latter days of Prize Comics.

However, Rutledge got off "scott free" with his panelological efforts. It was his material in the "he-men sweat mags" that ended his career.

In 1950, the publisher of many of these "men's magazines," Aesthete Press, was shuttered by J. Edgar Hoover. Many of the regular contributors to these publications--including Sheff Rutledge--were imprisoned for "conspiring to create reading matter of a possibly suggestive nature, sold through the federal mails to unwed middle-aged males." Rutledge served 23 years in prison. The law was informally known as the "Rutledge charge."

Upon his release from prison in 1973, Rutledge attempted to return to the comic magazine field. Under an alias, he briefly found work with Harvey Comics. His past caught up with him, and he was relieved of his duties. Nothing is known of his whereabouts after 1975. It is possible Rutledge is still alive.

Despite the curious, slightly disturbing nature of Rutledge's imagery, one cannot deny that he was a dynamic Kirby-inspired panelologist. If there were a category of "good rear art," Rutledge would, surely, be considered its Frank Frazetta, or Norman Rockwell!

In closing, I say to my apparently playful thieves: I double-dog-dare you to leave more comic magazines--and clues--at my home! Be brazen; be ruthless! But be aware that I am as wily as you, and as willing to play this deadly game--to its final round!

POST SCRIPT: I almost forgot to mention this--I have been asked, by a local order of the Shriners, to speak at their "lodge" about panelology in the not-too-distant future. "Sparks" Spinkle has been invited to "co-pilot" this appearance. (Speaking of "Sparks," my apologies for not discussing his crime-fighting exploits of late. That must be saved for our next "blogging.")
Posted by Mason J. Moray at 12:51 PM