Belated But Sincere Salutations for 2012! Featuring "Zardi- The Eternal Man!" From Amazing-Man Comics 16!

Friends, comrades, amigos--'tis richly satifsying to be at the keyboard, to construct a new blog post for your edification and enjoyment!

2011 is gone--nay, these 20 days it's been dead and buried. Who knows what 2012 shall bring? Feast? Famine? Bloodshed? Peace? Only the universe knows for sure... and she seldom warns us in advance!

Little has changed here, since my last bolg posting in November. The "11" dis-assembled the week before Christmas. Apparently, the lure of clean American socks and underwear, of fresh-baked holiday dinners and doting grandparents, was enough to break up this band of scruffy protesters.

Only one remained here--a chipper but funny-smelling lad named Jeffrey, whom the Diner has hired as a dishwasher. He is industrious, and of good spirits, but there is a certain vacancy to his presence. I've tried to engage him in conversation many times, but the trail of thought peters out. Soon, in mid-sentence, Jeffrey drops the thread and returns to his dish duties. He hums and hums as he washes our plates and cutlery. I suppose he is happy! Well, more power to him if this is so. If simple suds and hot water, the clanking of china and the tingle of "eatin' irons"  is sufficient to please him, then he, i n the words of Hemran's Hermits, is "into something good."

A certain complacency has settled in with the New Year. In our biggest news item: Bradley Kolger is no longer a resident of our home. He was quietly but firmly ousted two weeks ago.As you no doubt had intuited, his presence grated on Dorrie something fierce. Truth told, he had "burned his britches" with even "Sparks" Spinkle by the end of his residency.

Mr. Kolger grew fatter and lazier with each passing day. Tell-tale signs were rampant. His lack of clothing, for example. He digressed from simple attire to boxer-shorts to, finally, a ragged beach towel, which he wore like a sarong. Bathing was a rare event in his life, as were other aspects of civilized grooming.

The "capper" was his hearing of a TV commercial which featured the "la la la" refrain of the Beatles song "Hi Jude." Mr. Kolger took to that sing-song cadence like a drunken lark. At all hours, day and night, he might belt out several choruses of just the "la la la" interval of said song.

I have described Mr. Kolger's unfortunate tendency of "banjo-humming." "Hi Jude" was subject to that rather unique--and grating--interpretation as well. That was, as they say, the needle that broke the camel's eye! Dorrie, her much-needed sleep broken by this "humming," bolted from bed and stoermd down the hall to Kolger's lair. I heard the following--for I dared not take part of the scene...

DORRIE: OK, buster!
KOLGER: (banjo-humming)--Hunh?
DORRIE: Pants.... on... NOW!
KOLGER: Do what?
DORRIE: Get. Dressed. And. Leave. This. House.
(silence)
DORRIE: Now.
KOLGER: But it's after midnight, lady...
DORRIE: Now.
KOLGER: You wouldn't throw a senior citizen out on the streets, would you?
DORRIE: (deep sigh) In the morning, then. But. No. More. Humming. Go. To. Sleep!
KOLGER: You don't have to be rude about it...
(door slams; footsteps storm towards bedroom; I feign deep sleep as "the missus" crawls under the covers)

The next morning, Mr. Kolger was driven to a local senior citizen center and signed up for free lodging there. I supoose it was the right thing to do. Mr. Kolger had proven something of a let-down. How I'd hoped that his memories would provide me with a wealth of panelological data!

Alas, his accurate remembrances were few and far between. I had the sneaking feeling he was just inventing stories to humor me. Among his more spurious claims was that artist Bill Everett was, in reality, two spinster sisters who lived in rural Minnesota! Having met Mr. Everett at a comic book convention, "back in the day," I can attest that he was neither female nor two people--just one hard-working man.

I last saw Mr. Kolger posing as Santa Claus, ringing a bell in front of a ShopWay store. It was two weeks after Christmas, but I suppose a man dressed as St. Nick can summon a coin or two from a forgetful soul here and there.

Before his ousting, Mr. Kolger did, to his credit, remind me of one of the forgotten genuises of what I call the Age Prime Panelological (1936-1942). "Steve Wardell. There was a storyteller," he said.

"I'm not aware of a Steve Wardell," I said. "Elaborate, please."

"Steve was an older guy. Looked like one of those photographs of characters from the Civil War. Had a white beard. Wore a string bow tie. Looked like a Kentucky colonel. He brought in a couple of stories while I was still in comics. He did some series about an old man who could become young again. It was great stuff."

I was sure Mr. Kolger was up to more of his spurios trickery. Later, in conference with "Sparks" Spinkle, we made the connection. "Sparks" sat bolt upright from a deep nap. "Mace! We gotta go to the Pantheon... now!"

Silently, we shoed ourselves and hopped in the Pruis. "Prince of Zanzibar," "Sparks" said, more to himself than to myself. "Something about Eternity Man..."

"Sparks" raced to the door of the New Pantheon and was clearly itching to get inside. He did the nervous dance of a man waiting in line for a restroom after several quick beers. I unlocked the door. "Sparks" made a bee-line for box D11. He lowered it to the floor and squatted beside it.

I saw a colorful flash of covers of the beloved Centaur title Amazing-Man Comics. Among my most cherished possessions is a complete run of this seminal title, which featured stunning achievements of the Age Prime Panelological.

"Sparks" skilfully leafed through issue after issue, his movements adroit, and respectful to the aging pulp paper. Finally, he cried "Ah, HA!" and stood, again bolt upright. "Maceroony, this is IT! Ol' towel-boy was right!"

We read the story you are about to experience in aweful silence. 'Tis the way I recommend that you, dear friend, absorb this masterful piece of the art panelological: 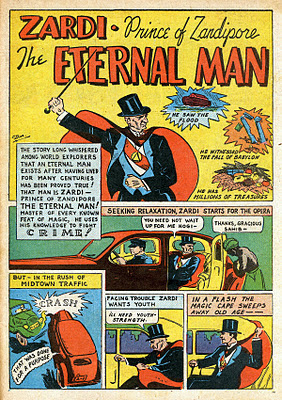 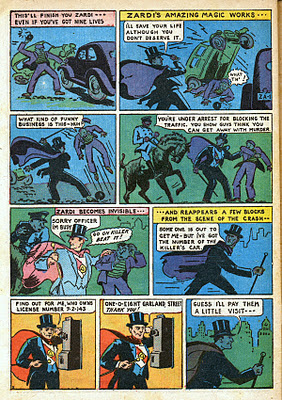 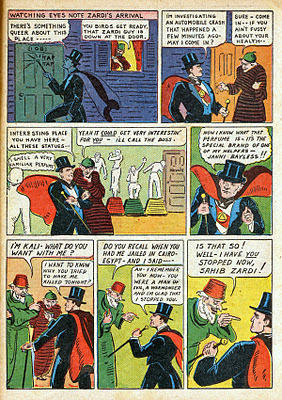 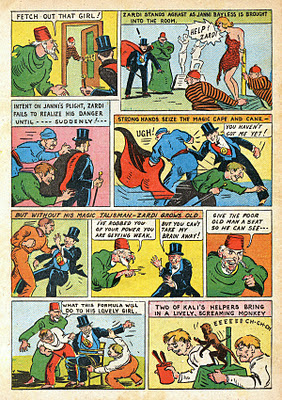 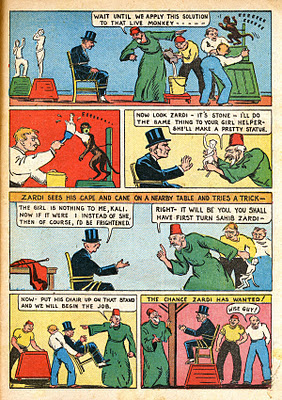 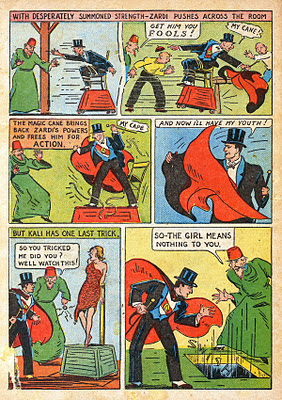 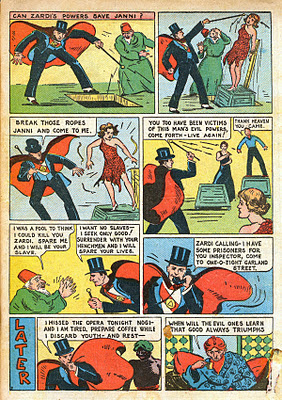 This rousing saga is dedicated to those among us who are over the age of 60. How bittersweet the concept of "Zardi" is to us in the autumn of our years! Imagine--being able to summon the vitality of lost youth with one swish of a magic cape!

Oh, to be spared the back aches, the arthritis, the eczema of advanced years! 'Tis a fantasy far more appealing than that of "Superman," "Captain Marvel" or even "Ibis the Invincible."

And, to quote my compadre, Mr. Spinkles: "Whillikers, could this guy tell a story! Wow!"

Wardell's blend of fantasy and stunning realism is stunning. For example. witness the marvelously true-to-life sequence, on page two of the tale, in which Zardi, despite the magic powers at his disposal, chooses to call directory information to secure information about a car's owner! This, from a man who can change his age, be invisible, and cast other phantasmagoric incantations! 'Tis just what I would do, were I Zardi!

Witness, as well, the poweful symbolism of the villains' attempts to turn living flesh into immovable stone! This, once again, deeply resonates with this particular senior citizen. Many mornings, I feel as though I've been tainted with Kali's treacherous brush!

"This story inspires me," "Sparks" told me, in strictest confidence, later that evening. "It's time a certain senior citizen crime-fighter went back on the job. There are evils--misjustices--all around us. Things it takes a masked avenger to repair!"

Thus, once again, I am the chaperone of  "Super-Senior," as he seraches out crime on the timid streets of our fair city. We have accosted one litterer and two loiterers. "Sparks" takes great pride in each wrong righted. I am thankful for the excellent mileage of the Prius, and that a nightly 11:30 PM rerun of "The Life of Riley" provides a strong structure to our nightly "crime patrol."

Oh--I've quite forgotten to add my own historical research to this blog posting. I cannot let this responsibility to the arts panelological lapse!

Steven Wardell was born in 1876, somewhere in the post-Civil War Southeast. There is very little data available on his life or work. His only panelological works appear in Centaur magazines, and no trace of his work is seen by 1941. He would have been my age when he wrote and drew the adventures of Zardi.

His draftsmanship suggests a bygone era. There is no sign of the sleek streamlining of younger panelologists. Wardell carefully crafted each pen-stroke, and was a stickler for detail. He owned a complete magician's outfit, including the all-important cane and cape.

A few younger cartoonists befriended Wardell, and, with his encouragement, strived to better their own work. Said Charles Quinlan, in a 1967 interview:

Wardell was a wonderful guy. He'd spend months on these six-page stories. He'd do sketch after sketch of key scenes. Any one of them would have been more than fine. But he insisted there was only one way to draw a scene right.


I still have... he gave me a couple of his sketchbooks. One is all canes! Canes drawn from every conceivable angle, over and over... the other one is all capes. Every wrinkle, fold and angle you could want on a cape is in this sketchbook. I used 'em on Cat-Man and other work I did. Wardell saved me a lot of time, and I'm glad I knew him. He taught me to put my all into every panel.


Of course, I produced less work that way, and made less money. I used to kind of gently curse Wardell every time I cashed a pay check. But I had a conscience. I had to do things his way. It never quite left me.

One wonders what happened to those fabled sketchbooks! I imagine they would fetch a small fortune on Ebay, or some similar web sight.

Well, 'tis time to go to the Diner and prepare for a busy day. I can almost hear Jeffrey's humming as I write these words.

POST-SCRIPT: Colleagues have informed me of my apparent presence on the popular notworking site, FaceBook. Indeed, some quipster has posed as myself online! This mysterious prank-puller appears to bear me no ill will. I am not a member of FaceBook--this I can assure you. I am too busy correcting Raphael's mathematical mistakes, and prodding Katrice to bus tables, to dawdle online and tell all about my daily minutae!

Unless, or until, this charlatan attempts to libel my good name, I shall let him (or her) have their innocent fun. I've gained many new e-mail friends from this FaceBook impostor. Person or persons: consider this a polite warning! Do not misuse the name of Mason James Moray! Elsewise, you may suffer the wrath of a certain senior crimefighter. Take care--beware!