Long Time No See: News and Anecdotes, plus "The Little Giant," from the sought-after "O.K. Comics" no. 1

Salutations, friends of the four-color art! It seems that each post I write must begin with regrets. I dearly wish I had more "free time" on my hands to attend to this "blog" of mine. I know there are friends who enjoy my postings--they are, after all, a literal history lesson in the far-flung fields of panelology.

Worry not, companions--I've not forsaken my beloved comics art! Life has intruded, as it's wont to do, and kept me away from the New Pantheon much longer than I desired.

Said New Pantheon was long overdue for an airing out. The last time I had ventured there, with garrulous "Sparks" Spinkle in tow, he had brought along a bag of thick-cut sea salt and vinegar potato chips, with a jar of garlic dill pickles for a chaser. "Sparks" is, of course, forbidden to touch the treasures of the Pantheon with such corrosive agents in his reach.

No sooner had my hunt began for potential "godies" to post on this blog than a call came--panicked--from the Diner. Katrice had set fire to the ceiling! No one knows, or will ever know, why or how she accomplished this. But our entire ceiling--from kitchen to cash register--had to be sanded and painted. Because of this, we were closed for nearly a week.

As a lession to Katrice, she was docked three hours' pay for this mischief. It is so very difficult to get a word from her that any possible explanation was literally rendered mute. I know the poor girl felt embarassment for her misdeed.

No harm was ultimately done. The celing, now painted a pleasant hue of orange, has brightened up the Diner somewhat considerably.

In our rush to help squelch the ceiling fire, "Sparks"' snacks were left behind, the bag and jar opened. I was unable to return to the Pantheon for two weeks. The overwhelming aroma of stale garlic, pickling spices, sea salt and vinegar nearly made me faint. I have no windows in the New Panthron, so I had to keep the door open and run a couple of big box fans. The smell is just about gone now, but a certain tang has seeped into the vintage pages of all comics not in their protective sealed bags. I suppose that endows them with some character.

You have not heard me mention my father, Austin Moray, in a "cook's age." He and I have  made plans to take a little trip together this summer--to visit a great aunt whose health is failing. "Pop"'s hearing is still poor, but his vigor is remarkable for a man nearing 80.

As an incipient senior citizen with the requisite aches and pains, I recently asked him what his secret was.

"IBM did it," he said (loudly). "They had a mandatory calisthenics deal. Every day at 3, a whistle blew. You had a padded cushiony thing under your desk. You pulled it out and did sit-ups, squat thrusts and such for 15 minutes. Somebody played an exercise record over the PA."

With a chuckle, he recalled one Friday afternoon when the record player's needle became stuck on a groove, and repeated "4... 5..." some 60 times before it was corrected. The entire staff of IBM was exhausted from repeating so many squat thrusts! This was back before the days of "classy action lawsuits," so the computer giant got off scott-free.

As an early birthday gift, I purchased a "lap top" computer for my father. He's become quite interested in the Internet, and, to my utter surprise, has joined "Face-Book!" If you are so inclined, please drop him a "line"--as I'm sure he would appreciate it!

Our trip is planned for May 7th. I must say that I'm looking froward to the chance to spend some uninterrupted "quality time" qwith my "dear old dad." Dorrie needs a break, and is, in fact, closing her Diner for the week that I'm gone. Her plans? To putter around the house, and to finish reading 17 different mystery novels she has started over the past five years.

I presume she can retain those complex plot "threads" in her memory. I've attempted to read some of her mysteries, but, honestly, one needs a physics degree to comprehend them. All that detail to recall! And it's so often dark, rainy and cold in those books. It gives me the sniffles to just think about it!

Back to our main topic of interest. (Some have complained that I perhaps go "on" too long about stories of everyday life. Well, so be it. This blog is a reflection of myself and the life I live. Were that each moment was spent savoring the vinegar-scented jewels of the New Pantheon! Were I only so fortunate!)

One of the rarer panelological gems in my Pantheon is the first issue of O.K. Comics, from 1940. How I found this scarce title is an adventure in itself. It was sewn into the side of a steamer trunk--along with a suicide note! I purchased the trunk in 1971 as a storage container for my then much-smaller collection of Golden Age treasures. I noticed the protrusion in the trunk's lid for years, but never felt compelled to further explore it. Finally, as I dediced to donate it to charity in 1983, I took an Ex-Ac-To knife to that bulge. Out slid this breath-takingly rare comic magazine, and a sealed envelope!

I have lost the letter in the intervening years, but it was typical of a sad person's last words... "give the enclosed to Kathy," the note ended. I assume that "the enclosed" was this scarce comic magazine. There are many Kathys in this world, and, at this late date, I do not possibly know which Kathy to give this grand publication to. "Finders, keepers," I say. Had I not "scratched that itch" of curiosity, a glorious piece of panelological history might have been forever lost.

An outstanding story in this early, obscure effort is "Little Giant," written and drawn by Mel Carruthers. I herewith present it to you now... 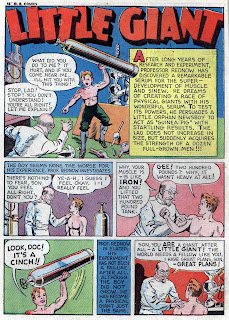 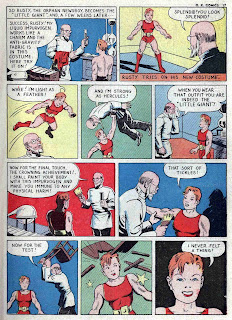 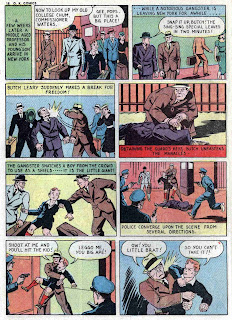 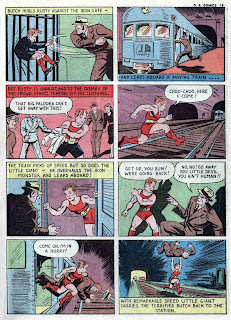 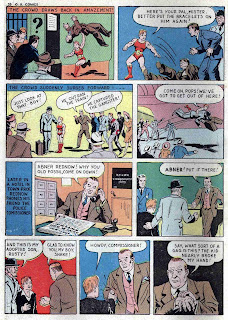 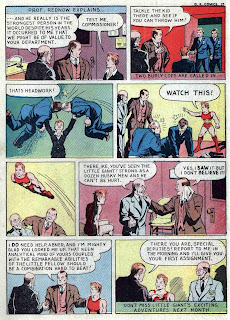 I must confess that elements of this story fill me with unease. I cannot quite put my finger on what bothers me about it. Suffice it to say that a certain feeling of dread sweeps over me each time I read these six pages.

The story begins "in medicas res," or, in English, "in the middle of the action." This was uncommon among early panelological story-tellers, who preferred to start their stories "a la primo," or, in English again, "at the beginning."

Perhaps it is Professor Rednow's apparent kidnapping of "Rusty," the crippled orphan newsboy. Or his presumption in spraying the lad, from head to toe, with the mystery chemical "impurvogen." Would this chemical not also cut off the boy's pores, and slowly suffocate him in what must certainly be a prolonged, painful death?

Such lack of attention to detail was a thorn in the side of Mel Carruthers, who toiled in the backwaters of the comic magazine and pulp magazine fields from the 1920s to the mid-1940s. Carruthers got his start writing for the adventure pulps. Somehow, his characters always do things the hardest way possible. An early series of lumber-camp stories, starring "Crush Peters," has its protagonist hurtling himself into the sides of trees, over and over again, sometimes taking days to fell a single oak.

Simlarly, another "pulp" series called "Speed Rogan" concerned a brash race-car driver who insisted on running behind his car and pushing it. Needless to say, he seldom won a race.

"Little Giant" was among Carruthers' more coherent storytelling efforts. He previewed this series in a 1938 feature called "Big Midget." In this short-lived series, the world's largest midget, "Stretch" Arvon, who measures an average 5'8", solved maritime mysteries with the aid of "Pepper," a talking raven. Each tale of "Big Midget" would invariably end with a group of policemen nodding their heads in wonder, and saying such things as "He's the BIGGEST MIDGET I've ever seen!"

Sadly, only one more episode of "Little Giant" appeared, as O.K. Comics folded with its second issue. That story, which I have yet to see, is evidently Carruthers' swansong to the panelological realm,

When Mel Carruthers wasn't writing improbable stories, he ran, in secret, a vast empire of early pornographic books and pamphlets. A common theme of these anonymous works is that of a scientist abducting a young man or woman and subjecting them to some sort of chemical process that alters their bodies, moods or outlooks. Apparently, this theme ran deeper in Carruthers' work than many might know or understand.

Carruthers was arrested, and his back stock of prurient publications burned to the ground, in a police raid in July, 1944. A few examples of his notorious "smut" (really, rather tame by modern standards--most of them could be made into TV movies) remains, and resides in several national archives. I have seen a copy of his 1943 novelet, Dark Graces, but its asking price of $25.00 was "too rich on my blood" when it was offered for sale in 1975.

Carruthers was jailed on federal charges of peddling pornography, and served 19 years in San Quentin. He left the prison a changed man. Now an accomplished painter in oils, Carruthers' specialty was air-borne kites. His six-panel, photo-realistic masterwork, An Ideal Day, hangs in the Smithsonian Institution, and is frequently cited as the single finest painting of a kite ever done.

He became a recluse in the 1980s. It is rumored that he is still alive, and still painting--his energies turned now to wind turbines, and his long-lived "kite phase" a thing of the past.

Before I conclude this "message in a bottle," I must satisfy reader curiosity. Yes, "super-Senior" is still in action. He has not found much in the way of crime, and is, I fear, somewhat disappointed in our sleepy little community. Many is the night that he opts to simply watch "The Bob Cummings Show," which precedes "Life of Riley" on weeknights.

It is just as well. I confess I do not enjoy being "Katto" to his "green Hornet." The life of a crime-fighter's chauffeur is seldom exciting--and often dull. I'd much rather prepare some microwave popcorn in anticipation of our nightly "TV treat."

It is unlikely that I shall "post" again until after my "father and son" "road trip." So "stay tuned" for "further developments!"
Posted by Mason J. Moray at 4:15 PM 2 comments: