"The Black Orchid"-- and the stunning story of its creators, Albert and Florence Magarian, from the enigmatic Tops Comic Book

Greetings and salutations! I seem doomed to begin these "posts" with an apology for my protracted absence. However, this time it is kustified.

I have been recovering from my "nasty spill" of late last year, while also working with efreveish intensity on my masterwork royale: The Golden Art of The Era Panelologic: 1937-1942. My original estimate of a trifling 1,000 pages now seems too modest. Indeed, this tome may well encompass 5,000 pages of fact, history and great comic book work from these six most golden years.

I trawl through a lifetime of research, interviews, doscuments and other facts to achieve this goal. It is my hope that this long-overdue book shall be taught in universities and other institutes of higher learning, and live long past my brief stay on this "mortal coil."

I am oft made keenly aware of material that falls beyond the scope of my "tome," but which still intrigues me, as it contains the essence of the art panelologic. Great works succeeded the "golden six" years of my book. Thus, I feel an urgency to share it here, while "the iron" is "hot."

In 1979, I acquired a most unusual comic book publication. So unique is its format that I had, indeed, forgotten I had it! It was stored, page by page, in a series of archival rice-paper envelopes, tucked in the middle of box W-3.

This book is the stuff of which dreams are made. There is a bit of intriguing history behind its publisher. The humbly named Consolidated Book Publishers were what one might wisely call a "journeyman press."

Their presses rolled night and day, printing everything from newspapers to banners to coloring books to restaurant menus. Their Apex Laminaster 2200 gave them the "edge" to succeed in printing any documents that needed protection, via a laminated cover.

By 1943, the comic book boom was duly noted by even the least likely sources. Due to "the war," comic magazines were the preferred reqding matter of our boys overseas. In their shell-shocked state, great work sof literature were beyond the grasp of "our fighting forces." Whereas, the immediacy, impact and power of the panelological page spoke directly to their needs and hopes.

Thus, Consolidated hoped to join the comic-book boom. It was seen as "the right thing to do," and a patriotic gesture of solidarity towards "our boys."

In-between a large run of laminated menus for a railroad line, they attempted to publish their first, fledgling effort in the comic magazine realm: Tops Comics. At a bonus 128-page size, the brick-like booklet would be shipped overseas and dropped, by parachute, into the theater of Pacific war. Copies, of course, would be sold "state-side" at news stands, but the idea was to give "the boys" a solid selection of thrills and laughs--the latter served up with a ream of "little moron jokes" and the detective spoof of "Dikky Dinkerton."

Due to a misunderstanding of the press operator, the entire run of Tops Comics was accidentally printed on laminated menu paper. Thus, one 128-page issue weighed some 14 pounds, and had a girth of nearly one foot! This was deemed unwise to ship overseas (altho' its laminate would have aptly protected it from the humidity and grime of the Padific Theater).

To make the matter worse, after the loss of revenue in waste from this printing mishap, newsdealers refused to carry the bulky, slippery product. One bundled "issue" broke loose in a Minneapolis hotel on a rainy afternoon. Its loose, laminated pages caused 11 slipping accidents, including one severe head trauma.

The resultant bad publicity ("Mother, 32, Whacks Noggin in Minn Hotel--Blames So-Called 'Comic Magazine' For Fall," read one national headline) temporarily derailed Consolidated Book Publishers. The pages languished in a dank warehouse until 1979, when Kurt Bolton discovered them and first distributed them to interested "fans." I was among the first to receive this parcel of musty, yellowing-but-cleanable comics history.

I pried one page apart, out of curiosity, and found that a perfectly-preserved printed page awaited beneath. I eventually separated all 128 pages from their time-worn plastic prisons. Since then, they have remained in their special envelopes, safe from sunlight or other damanging agents--and, until late last night, from my memory!

Most intriguing of the features accidentally printed on crisp cardstock, in a variety of color options, is "the Black Orchid," the creation of one of the most unique family teams in comicdom-- Albert and Florence Magarian. I shall tell their astounding tale after you have immersed yourself in the uniquely doom-laden, tense world of "The Black Orchid!" 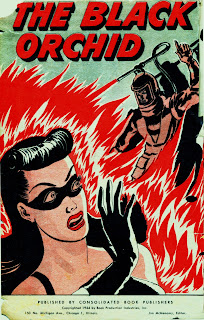 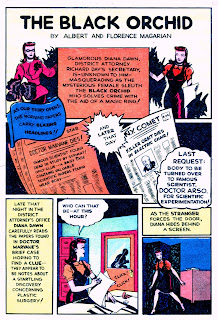 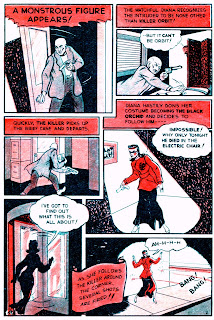 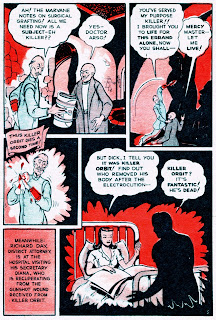 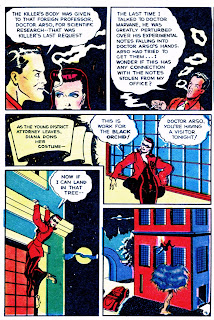 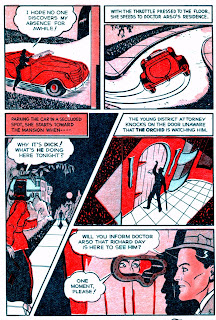 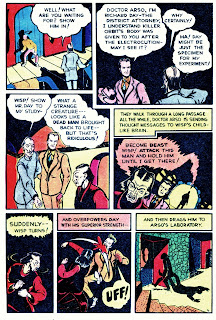 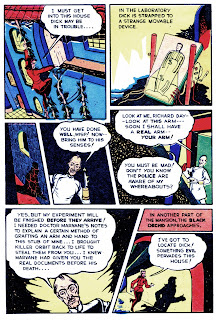 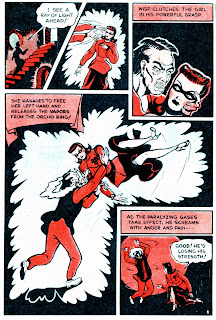 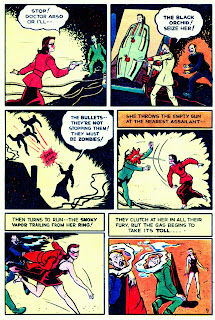 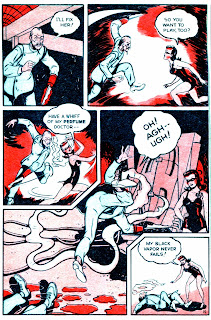 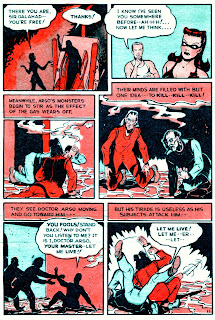 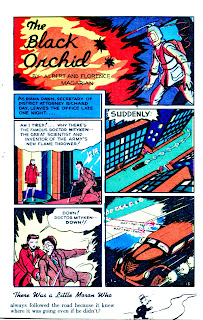 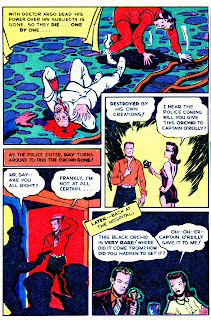 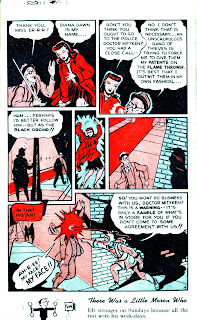 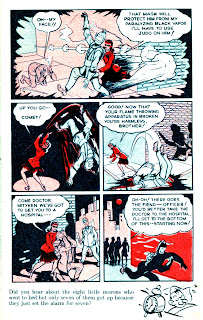 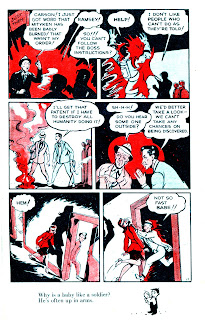 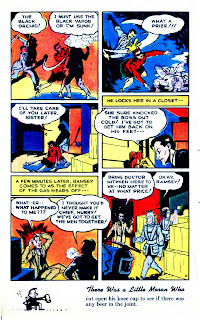 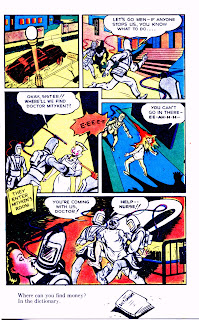 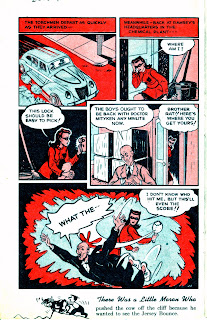 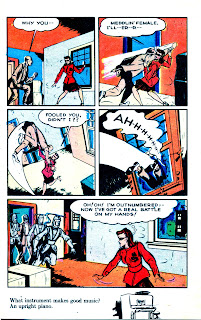 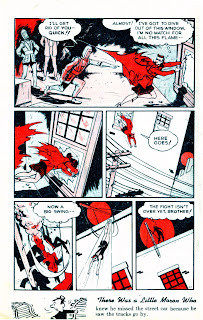 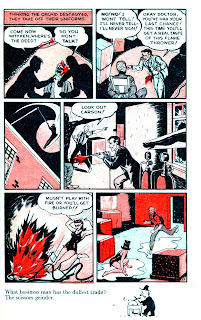 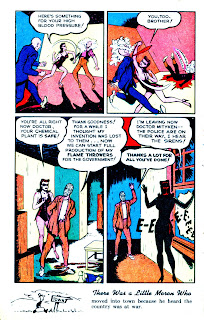 Stunned, eh? I know well the feeling. Now, onto the matter of the creative team behind these stories. One would assume, from the credit of Albert and Florence Magarian, that these creators were husband and wife--rather like the Berenstain family of those charming children's books. Brace yourself for one of the weirdest stories in panelology.

According to this website, Siamese twins tend to be of the same gender. Given the endless quirks and quadrants of our DNA, it's no wonder that this roll of the genetic dice rendered a boy/girl co-joined birth. Albert and Florence were born in 1919 in the Bronx. From infancy, both children demonstrated an artistic bent. As one family story recounts, their uncle Farrell witnessed the tots each absorbed in a different creative action. While Albert doodled on the living room wall with a grease crayon, Margaret strained to play the keys of the family's out-of-tune spinet piano.

Due to a public outcry against Siamese twins in the 1920s, the Magarians were home-schooled, and seldom, if ever, left their home. In isolation, the brother and sister both turned to drawing. Each excelled in a different area. Margaret, the twin on the left (if viewing from their point of view) was a gifted draftswoman, with a sensitivity to contour and dimension. Albert, on the right, excelled at painting and fine-lined rendering.

If ever a team was literally born to create comic book material, it was the Magarians!

From 1939 to 1967, Albert and Florence Magarian created some 11,000 pages of comic book story and art. They fearlessly embraced all genres, and astounded editors with their elegant work--and, most impressively, with the speed in which they delivered finished stories.

Given an assignment by messenger, a script could be "turned about" in a matter of hours (if it were, say, a teenage humor piece) or days (if a more complex Western, war or historial tale).

The Magarians never met any of their employers. Their communication was by telegram and telephone. Farrell Safkarian, the afore-mentioned uncle, was interviwed by myself in 1981, and offered these revealing glimpses into a truly hidden life:

FS: They never left that two-bedroom apartment. Maybe once, in '52, when Albert had to have a root canal. The headaches got to them both, you see.

MM: Did you ever see them at work?

FS: (laughs) When DIDN'T they work? Night and day, they was at that [drawing] board. She sketched in the figures, you see, with her left hand. Albert had the pen and brush ready. He'd be finishing a drawing while she was still sketching it!

FS: It had to be. They were like a married couple. Got on one another's nerves all the time. Albert smoked cigars. Margaret hated the smell. And she had a habit of humming the same tune, over and over, for hours at a time. Boy, would they yell! And fuss! The walls were splattered with ink, from Albert throwin' the bottles at Margaret. Only he could never hit her. She was too close. But those walls, boy. You could smell india Ink the minute you walked in there.

MM: Did you see them often?

FS: I was their errand boy! Got them groceries, went to the publisher's offices and got scripts. That was before they started to write their own stuff. And, of course, I took the big boards in for 'em.

FS: The pictures. They did 'em on these big papers. Looked like boards to me. All wrapped up. I don't know who wrapped 'em. But they were always wrapped in butcher paper and tied with twine. Really neat knots.

MM: What else did you do for them?

FS: I'd see the picture, memorize the story, and tell 'em about it. I guess they wanted ideas for their comic books.

MM: What did you think of their work?

FS: (laughs) Aw, it was just for kids. I never looked at it. Was always surprised how well they got paid to do that stuff.

MM: Well, sir, there are many who declare this 'kid stuff' to be the thing of artistry.

MM: Did Albert and Florence ever meet with their publishers?

FS: Nope. Never left that flat. They were afraid that if the world knew about 'em, bein' joined at the hip, that they'd lose their jobs. They spent their entire life in that apartment. Come spring and summer, I'd move their table by the window. When it got cold, we set it up near the radiator.

Albert was a sleepwalker...

FS: I just did. He'd get up at night, walk around the rooms, out like a light. Margaret got used to it. She had me get her one of those miner's hats--you know, with the light on the top. At least she could read while Albert did his business. Then he'd get right back into bed like nothing happened. (laughs)

They were something else!

Indeed, their uncle's summation still proves apt. Albert and Florence Magarian, though they lived behind a curtain of shame, and distanced themselves from society, ironically helped influence the tastes of that tempting outside world. How they must have longed to join the throngs on the street beneath their window! How alluring must those gentle spring zephyrs have been! Yet they never dared expose themselves to the world.

Yet they did bear their souls through the medium of panelology. And for this, we remain ever thankful.

I am sorry not to have on offer any musings from my own personal life in this edition of the "bolg." My main priority is to present these forgotten works of the art panelologic. Perhaps I might best pursue a second "blog," strictly devoted to a diary of my daily comigs and goings. What think you?

Until next time, my comrades of the comic magazine!
Posted by Mason J. Moray at 9:16 AM 5 comments: