And Thus, A New Era Begins!

Salutations and humble apologies for my long absence from these plains. 'Tis a time of great industry and joy in the Moray homestead. Dorrie's Diner thrives, even in these grim days of economic despair.

Business booms for us; thus we have added a veranda for outdoor dining. This veranda occupies much of the back yard. Alas, the Former Pantheon had to be uprooted. I planned to have it towed to the county junk yard. Burt Liffler, always puttering aimlessly in his alleged garden, got wind of my plans and cornered me, prior to the expulsion.

"Nonsense, neighbor," I sighed, "it is yours for the asking."

"I repeat: the shed is yours, free and clear. No payment required."

Mister Liffler finally pressed two 20-dollar bills in my palm and trotted away with glee. I could not return the monies to him. Thus, I considered it a donation to the New Pantheon. 'Twas well spent on archival backing boards and acid-free comic book bags. A few of my pre-1940 titles are in dire need of a new set of "duds." Comic book bags were made of crude polystyrenes in the early 1970s. Time has not been kind to them. They have yellowed and withered, like the sere flesh of a sunbaked crone.

Where was I? Oh, yes--the veranda. It is a sea of maroon-hued cedar planks, decorated with merry dots and dashes--themselves the artistry of Ray-Don, our village's supreme aesthete. The initial expenses of new furniture, umbrellas for daytime dining, and a smattering of tropical plants (the better to give the layout that Southern Pacific "vibe") have all but been paid for by our increased patronage.

I've not had as much time to spend in the glory of the New Panthron as I would like. A booming business means increased responsibilities! My role as manager demands that I do the nightly accounting. Raphael is a dear lad, but his increased role as waitstaff-cashier has not been Dorrie's finest hour as a decision-maker.

I fear the young man has a slight case of dsylexia. He tends to swap out numbers. An entree priced at $7.50 will be rung up as $5.70 or $7.05. Our master receipt is number-coded as to each specific item. Thus, I can, at a glance, detect which entree was purchased. Typically, we either have a slight overage or a noticeable shortage.

To this end, I am in the process of converting the cash register to a series of numbered keys. Dorrie's Sophisticated Sass Omelet, for example, is item 28 on the numeric list. On the keypad proper, its number is 82. This accommodates Raphael's vision problem and assures less accounting time for yours truly.

I write this missive, so long overdue, from the cool shelter of the New Pantheon. You may recall that, in my prior post, I reported odd vibrations and accompanying noises issuing from somewhere in the storage facility. As a lifelong panelologist, I am something of an armchair sleuth. I ventured deep into the subterranean bowels of storage to further investigate this phenomenon.

I located its source. In the sub-sub basement, back in a dark corridor, is a room even a blind man could locate. For the smell of peanuts--fresh, rich peanuts--suffuses the very air.

On the door is a hand-lettered sign that reads:

BUTTER-KING DO NOT KNOCK
The door's edges, near its rusted knob, are smeared with an ochre goo. From within comes a great grinding and jolting vibrations. Friends, we have an illegal manufacturer of peanut butter on the premises! I should be fair; perhaps they have obtained a legal business permit. This I know not as of yet.

It poses no threat to me or to the contents of the New Pantheon. I don't believe peanut butter is flammable or airborne.

Speaking of flames: today's offering is thematically linked. Today's post, in deed, contains two full-length paneological stunners from the same 1940 comic magazine. The second issue of Wham Comics, published in those wild "fronteir days" before the second World War, offers a brace of astounding four-color fascinations. I share with you today its two top features: "Blue Flame" and "Solarman."

I have more news to share, but shall wait until after today's festivities commence. We must have our panelological studies, mustn't we?

The greatest thrill of a vintage comic magazine its is bold, emblazoned cover. Such vivid hues! Such promising scenes--a moment forever frozen in permanent time. How I pity those whose pitch does not quicken at such a grand, glorious sight: For once, the contents build upon the eternal promise of hope given us by this spectacular cover. All features in Wham Comics are top-flight panelology. I shall mete these out so that you and I might better savor their superior charms.

Lew Glanz (with uncredited writer Sherm Blystock) created the most unusual--dare I say surreal?--(I dare!) BLUE FIRE. 'Tis among the most distinctive and imaginative costumed-crusader features of the American comic magazine, circa 1940... 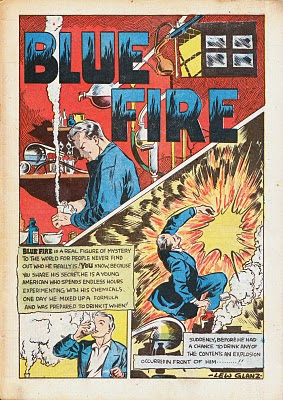 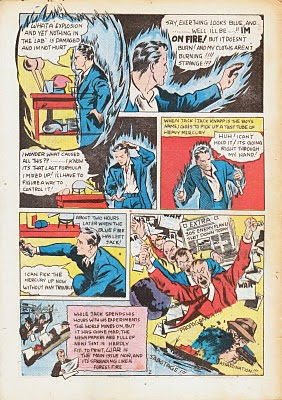 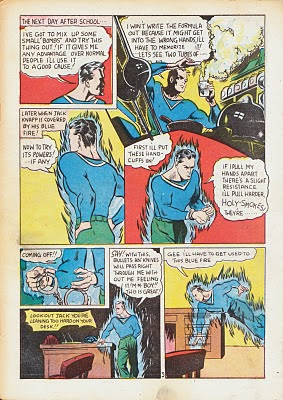 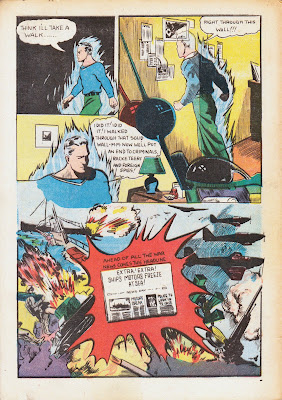 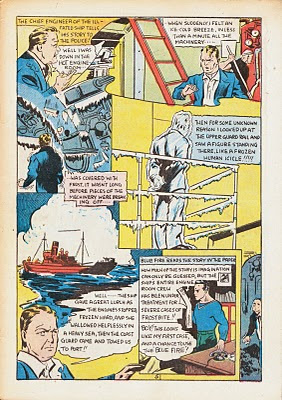 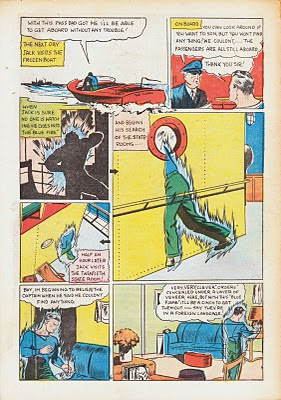 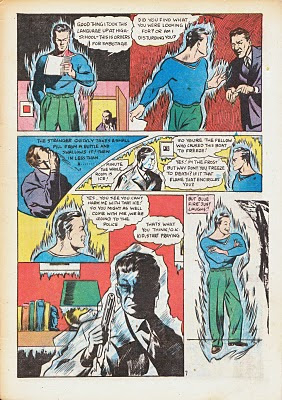 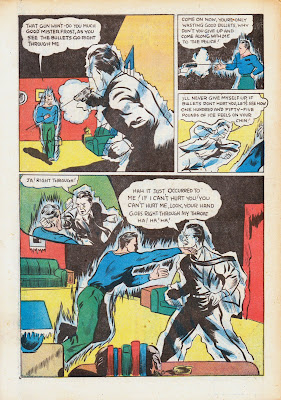 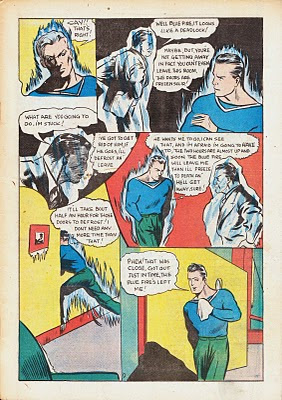 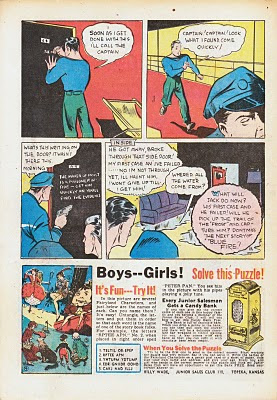 I was fortunate to speak with Sherm Blystock in 1973. I tracked him down to a retirement home in Palisades Park, New Jersey. Mr. Blystock was still "with it," and offered this sardonic view of what most panelologists would regard as his mangum opus:

MYSELF: Now, onto the BLUE FLAME...

Oh, oh, yes. Fire, not flame. As I'm sure you realize, this was among the more unusual super-hero features of its time.

What divine burst of inspiration gave birth to this creation?

I needed money to pay the gas bill. We'd just gotten married, and a kid was on the way. Winter was coming on, and we needed the heat.

You know... the gas has a blue flame. I kept staring at the pilot light. It was the middle of the night. I was up with indigestion--those clams weren't so fresh. I needed some sure-fire money. I'd written for the funnies before... KOGAR, STRETCH ROBINSON, ACE BRANSON. Pretty standard stuff. But I knew I needed something new. Something different.

That pilot light on the stove. It was so blue and bright. And I got it in my thick skull that a fellow who could master that blue flame might make a pretty good character. I got out my pencil and pad and by morning I had the idea down and a couple of stories mapped out.

The interview ended abruptly with a call for luncheon. Blystock was wheeled away by a male nurse. I never saw or spoke to him again.

Frank Thomas was a heavy-weight in the comic magazine field for many years. Although he later specialized in "cartoon critter" features for Dell Comics, an early forte was his imaginative, boldly designed super-hero and action stories, including the stylish (dare I say chic?) Solarman.

I don't usually feature such "big lights" as Thomas herein. As you know well, I prefer the underdogs of panelology. But a tale as good and as startling as this must be seen again. And thus it is! 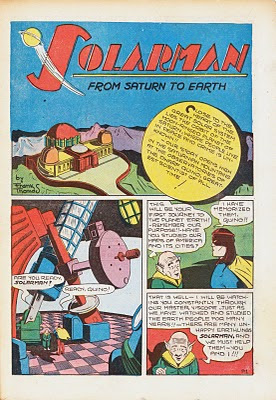 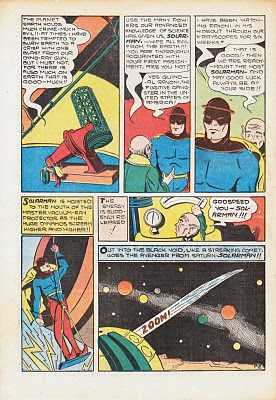 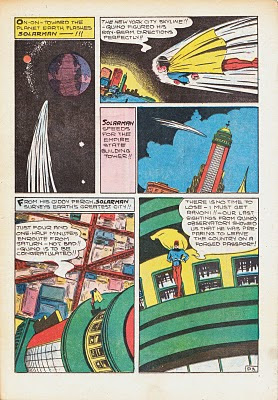 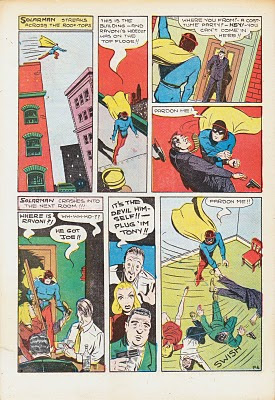 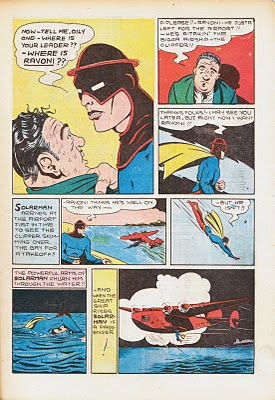 'Twould seem that two features as strong and graceful as these were "shoe-ins" for long-term success. Alas, Wham Comics went the way of so many colorful, promising titles in the wild and woolly early days of the genre. As you'll no doubt agree, it was the world's loss (and ours as well.)

And now that news I alluded to earlier...

"Sparks" Spinkle has taken ill. He has always been a bit on the delicate side--a truth he would deny vociferously! He is a spry, bird-like fellow, quick-witted and possessed of great vitality, even as he approaches 70 years.

However, he has always suffered from asthma, and in the autumn of his years, this condition has worsened. "Sparks" and I were struggling to master Power-Point, the better to prepare a presentation on panelology for the local Shriners group. In the midst of a heated discussion over The Star-Spangled Kid (I despise the feature; "Sparks" adores it), he suddenly collapsed in a wheezing, gasping heap.

We rushed him to the Emberton Memorial Emergency Medical Centre Pavillion. I feared the worst. Dorrie and I spent the greater part of that evening in the waiting room, me pacing nervously, she napping quietly.

The news eventually came: "Sparks" has a partially collapsed lung! The doctor implored us to see that he has three months of bed-rest. We have installed a special breathing apparatus (which "Sparks"' insurance, thankfully, paid for in full). The machine is painted red and blue. It ticks loudly and irregularly. The ticking has made my sleep fitful of late. The ticks are joined by a raspy sound rather like a fingernail running up and down the bottom string of a bass fiddle. (That, you see, is my friend's inhalation and exhalation, aided by the ticking gadget.)

Night before last, "Sparks" called me into his room. He bade me sit down by his bed. "Mace," he said, "as you know, I've been doing what little I can to make sure this fine town is crime-free. Doc says it's three months of lay-down for me. Can't get out and patrol the streets like I used to."

I started to speak. "No, no, I know you're against it. But you have to admit I've made a difference around here as 'Super-Senior.'"

I nodded. I didn't know what else to do.

"Without me, this burg's gonna go back to its lawless ways. Listen--do a pal a favor."

"Go out at night. Just make sure everything's OK. You'll find my crime-fighting kit out on the carport. It's in a big Ross Dress-For-Less bag."

"Mace, I've been there for you. More times than I can remember. And now I'm asking you to be there for me..."

A tear welled up in my friend's eye. It trickled down his face. He sniffed once, patted me weakly on my arm, and then attached the breathing tube to his nose and mouth. To the tune of ticking and rasping, I left his room.

So far, I have made three patrols of our fair city. Not in costume, and not on foot. I've taken slow drives through the main streets, at 10 miles an hour, in search of malfeasance. I did catch one ne'er-do-well who took two newspapers for the price of one. I honked my horn at him, opened the window, and wagged my finger in his direction. I hope he was reformed.

Well, 'tis late and the vibrating of "BUTTER-KING" has commenced. I suppose it's time that I head out and give the streets a "once-over." Crime never sleeps, but "Sparks" rests soundly in the knowledge that I am, albeit reluctantly, carrying on his noble cause. Wish me luck, my comrades in comic book artistry...
Posted by Mason J. Moray at 9:13 AM 1 comment: