Friends, 'tis been aeons since your humble pilot last navigated this craft 'midst the sweetly fragrant waters of paneology. Such apologies have become the standard on this "bolg," I regret to say.

Life becomes richer, yet more complex, the older I get. Our restaurant thrives in its new "rerto" location--not so new, truthfully! The site has been occupted by Dorrie's Diner for six months now. At last, the scent of "Sloppy Doe" has all but vanished from our humble household. In its stead is the cloying tangle of "Febreze" odors.

As "Sparks" Spinkle, my comrade, puts it in his earthy terms: "More tang here than in a New Orleans cat-house!" All of us have had a late occurence of hay fever, with much sneezing and fast liquidation of tissues the norm.

Abd, as you may have intuited by today's title, a certain Golden Age panelologist still resides in out home. Oh, how I curse the day I invited Bradley Kolger into our adobe! Never have I known a human being so capable of sheer, relentless EATING!

Mr. Kolger has put on considerable weight since joining our extended family. He looks like a little Buddha. His frequent garb of a bathrobe and striped boxing shorts only adds to this effect.

As I write, in teh safety of the New Pantheon (thank the heavens for its existence!) I picture him seated on the living room couch, happily munching away on his favorite afternoon snack. Alternating on a large serving plate are stalks of celery filled with peanut butter or Cheez-Whiz. Liberally spirnkled atop the peanut-butter stalks are small nonpareil candies. Atop the cheese-stalks is a garnish of garlic salt.

I shudder to recall the sounds of his grazing. First, a steady, march-like crunching, decorated with his unconscious sighs. Then, a ritual licking of each digit on the hand that held the stalk: POP! POP! POP! POP! POP! Five perfect cartoon sound-effects, delivered with cringing precision. Then, after a hearty clearing of the throat, the death-march crunch-munch resumes.

I will give Mr. Kolger his due: he has been willing to sit for hours of interviews. His stories about the creators of the Golden Age of Panelology are fascinating, ribald and complex. I hope to have them published in book form soon. Perhaps the next "post" here will consist of highlights from his memoirs. There is an anecdote about Charles Sultan and Rudy Palais that is a side-splitter--I can't wait to share it with you! (Teaser: it involves pigeons and a pencil sharpener.)

I am also pleased to announce that Mr. Kolger has resumed his craft as a panelologist. In collaboration with "Sparks," he is apparently at work on a "Super-Senior" graphic novel! I admit some growing cynicism at Mr. Kolger's claims that he has completed "over 100 pages." "Sparks" assures me the work exists, and that it's good. "Gee, but it's a corker, if I do say so myself--and I do!" my friend is fond of boasting.

Have I seen one single page? Nay, not a line! This household's answer to Simon and Kirby wish their work to remain unseen until the entire work is completed. "Sparks" did "leak" the graphic novel's working title the other day: They Call Him...Super-Senior--A Man The Whole World Needs! I presume the last half is a sub-title. Otherwise, 'twould be hard to fit all that hyperbole on a single page!

How is my dear spouse weathering the presence of Mr. Kolger, you might ask? Answer: not well, not well at all. Were we both not so occupied with the success-story of the Diner, I imagine we would be seeing some counsellor or psychiatrist by now.

Mr. Kolger makes his presence constantly known. His habits are those of the seasoned bachelor--of one not used to the constant presence of other people. Though he is an engaging and sometimes-charming fellow, he has his quirks. "Burp-talk" is perhaps the biggest point of contention, from Dorrie's POV. Mr. Kolger consumes a great deal of diet ginger ale, and uses the carbonation build-up to speak entire sentences in the form of a common burp.

The man has talent in this area, to be sure. It is rather uncanny to have a long reply rendered in the buzzing tones of gastric release! Being a fellow male, I don't mind it (much), but it drives the "little missus" wild with exasperation.

Dorrie laid down the law last Thursday, after one such exhalation from Mr. Kolger. "You. Are. Not. To. Do. This. At. Our. Table. Again," she said, her forehead crimson with rage. He apologized immediately, and has since confined his "burp-talk" to the inner sanctum of our guest room.

Said location is where Mr. Kolger purveys another of his creations: "banjo-humming." This effect is achieved by 1) humming and 2) running one's index finger up and down over one's lips while humming. Once again, I admit the effect is impressive, but even "Sparks" has taken issue with this musical habit, and has called him the carpet for it!

"Sparks," Mr. Kolger and myself share a fondness for the disturbing television serial "Breaking Bad." Monday nights find us seated in the living room, sweating our way through each new episode. "Sparks" reacts to the mis-steps of Walter White by sitting with his knees folded up, held by his hands in "cannonball dive" position, and uttering "OH, gee! OH, gee!" Mr. Kolger slaps his forehead, and offers Mr. White counsel that he, a fictional character, cannot possibly hear, or benefit from.

We all agree that "Breaking Bad" makes us each feel much better about his own life. Not that I have much to regret, at present (save one very obvious and ill-advised decision!)

In other news: Raphael has become a local media celebrity! Channel Six NewsTeam members descended on our restaurant, ostensibly to do a "local color" piece on the bistro. So taken were they with Raphael's Latin charm that the story became all about him. I learned harrowing details of Raphael's life that shocked and moved me. It only confirms the faith in my decision to become his mentor.

Since the broadcast, Raphael now has a twice-weekly berth on Channel Six's Evening Journal Review (a glorified news program, despite its lofty title). Raphael is interviewed by the show's hosts on a variety of surprise subjects, including world events (in which he is surprisingly savvy!)

Needless to say, there is no such thing as bad publicity. His public appeal translates into consumer faithfulness for Dorrie's Diner. To our surprise, he has not asked for a raise, nor displayed other "tells" of a swollen ego. Sweet, dear, down-to-earth Raphael! Dorrie and I plan to increase his salary in November, as a sort of "early Christmas" for him.

Not everyone patronizes this "blog" for my small-town chit-chat. I know that many of you are eager to get on with the show. Well, here it is--and what a show!

I was reminded of the brilliance of today's twin offering when Box 7-C fell off the shelf last week, sppoking me out of a year's growth! This, the 20th issue of Cat-man Comics, literally fell at my feet. The Holyoke comics titles are a mixed lot, at best, with inspiration, overblown grandeur and tedium mingling 'midst each issue of every publication.

First, here's a bloodthirsty scene of Nazi strangulation by the titular hero of the title. Notice the glee with which it is drawn! 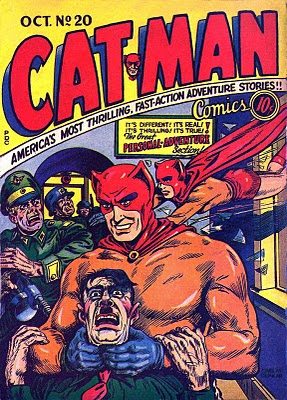 'Tis not the Cat-man's exploits you'll see today! As is typical, the back-up features far outshine the main attraction! "Ragman" is a haunting, eerie and moody feature, created, written and drawn by Herman Browner. This is perhaps the single greatest installment of the series. Browner's skill at creating and sustaming a mood is most impressive. Notice, throughout, the role of the Afro-American "Tiny," who is billed as "Ragman's Faithful Helper." There is a touching, true-life coda to this story, which you'll read at tale's end, below. 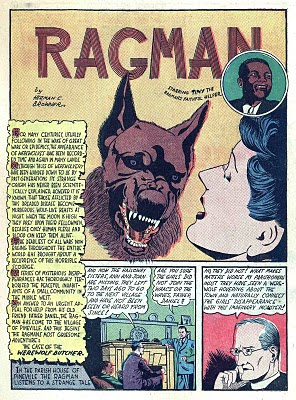 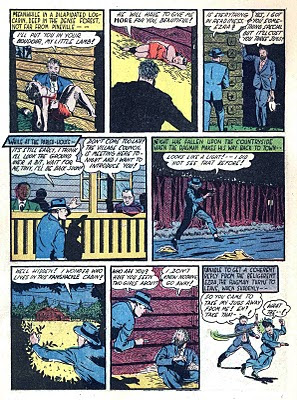 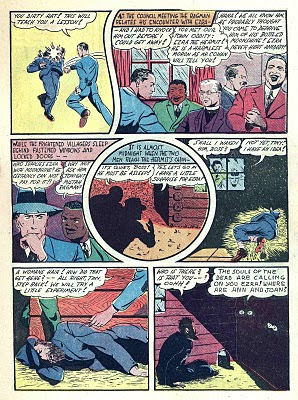 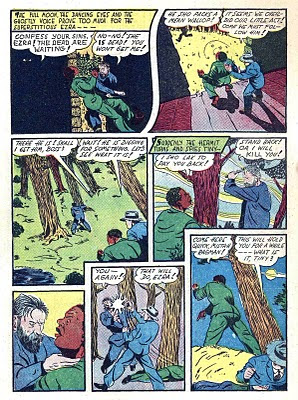 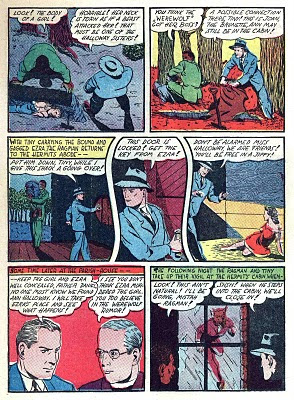 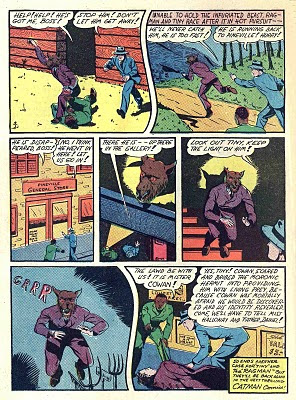 As said at story's beginning, "Ragman" was created, written and drawn by Mr. Browner. You'll notice I did not mention the lettering. Friends, Browner was a gifted illiterate. He had immense talent as a panelological renderer, as you'll no doubt attest, but the man could not read or write in any language.

Browner lived in constant shame and fear because of this learning disability. The man tried--and tried--to learn how to read, but claimed "the letters get so mixed up it hurts!" It is believed that Browner suffered from reverse dyslexia, in which, through the afflicted viewer's eyes, the columns of text are a hopeless jumble.

Browner's ruse wa ssuccessful for years--until one day in 1948, when he was arrested at a midtown Manhattan bank. Browner was merely attempting to deposit a paycheck, which had a typographical error. The check read "two hudnred and fitfy dollars" instead of two hundred and fifty.

Browner had to publicly admit his illiteracy when questioned by the police. He was ousted from comic book work as a result of that confession. Remarkably, Browner went on to greater success as a sign painter! With "Tiny" by his side, dictating each word and letter, Browner was soon among Manhattan's elite "window and card men"--a position he proudly held until his 1963 death. Browner never did learn to read!

Up next is a riveting tale of "The Hood," by the team of A. Cornwall and Richard Thresher. (Don't be deceived by the "Al Mandel" on the Hood's cape. That was, in fact, the garment's name!) 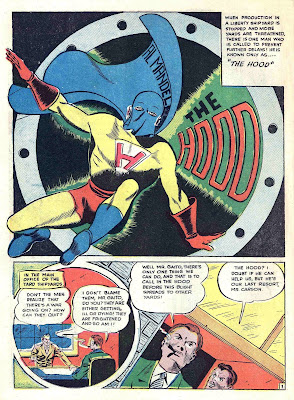 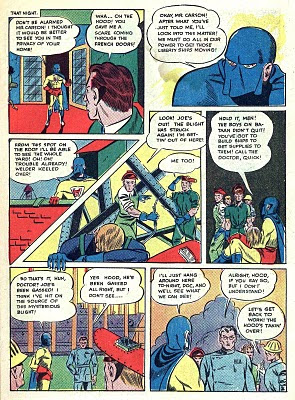 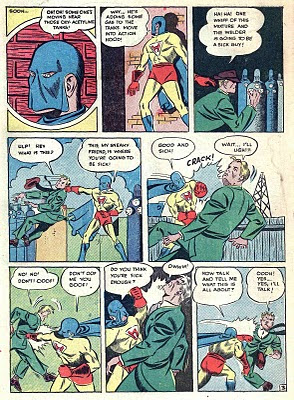 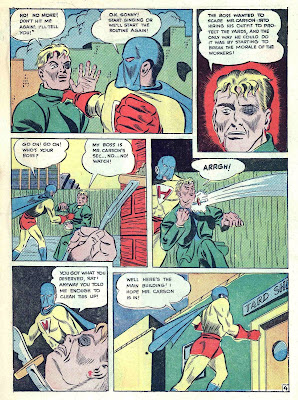 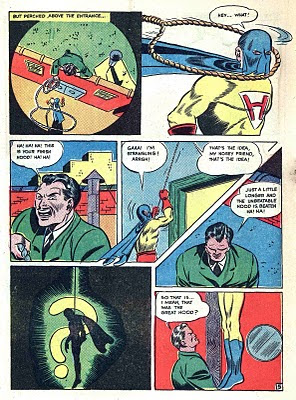 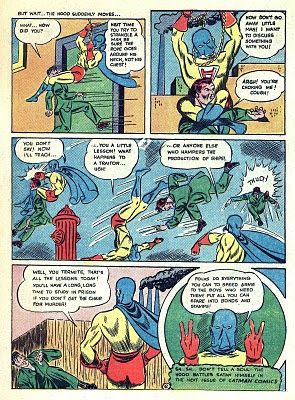 Little is known about Richard Thresher, due to his over-identification with his creation, The Hood. Thresher wore a mask, night and day, exactly like the Hood's own cowl. His reason for such outlandish garb? Sinus problems! Thresher claimed that wearing the mask helped relieve painful sinus pressure, which plagued him throughout h is adult life.

From an interview I did with Arthur Cornwall, in 1974:

Tell me about the artist on "The Hood," Richard Thresher...

Heh heh! What a kook! We all called him "The Hoodlum," which he hated! Made him want to spit nails. I used to bring scripts over to his apartment in Greenwich Village. Even on the hottest summer day, he'd have that fool mask on.

That thing got dirtier and dirtier as time went on. We'd sometimes go out to eat, and he'd lift the bottom part of the mask up with a knife, and shovel in food with his fork. He was a pretty good artist, but he had bad aim. Over the years, that thing got caked with gravy, syrup, coffee stains, ketchup and whatnot. But he wouldn't take it off! Not even alone at home.

What became of Mr. Thresher?

He was declared 4-F in World War II, but they finally drafted him into the Korean War. Lord knows how he made it through basic training, with that thing on his face, but he did. Last I heard of him, he was a layout artist for Filmation Studios, out in Hollywood. I'll bet he still has that darned thing on to this day!

I found Mr. Cornwall a rather bitter, vindictive fellow, with many harsh comments about his colleagues and rivals. To be honest, Cornwall's scripts are the worst aspect of "The Hood." Despite his eccentricities, Thresher showed a certain dramatic flair in his artwork. I particularly enjoying spotting his blacks. They are all over each page, and delivered with confidence.

Well, friends, the clock tells me that it's almost time for "Breaking Bad." 'Tis time to join my comrades at home. I'm almost afraid to watch!
Posted by Mason J. Moray at 2:04 PM 1 comment: