The Crisis Continues--With A Faint Ray of Hope! In Today's Post: The Stunning Original Tale of "Shock" Gibson, from Speed Comics 1, 1939!!!!

Friends, I am still a broken man, and still without the bulk of my lifelong prize possessions. News of my disaster has spread far and near, and I have been showered with an outpouring of comfort and understanding from my friends, fans and followers in the panelological community.

As the saying goes, "A good man can't stay down!" In this spirit, I endeavor to present a spectacular posting today. Let the jackals who purlioned my dear comic magazines cackle with offensive glee! They didn't get them all--and they shan't!

Here, vile thieves, is one you left behind! You dropped this one--or didn't you notice? You missed one of the crown gems of the Former Pantheon--and one of the most stunning full-length narratives of the GPE (Gilded Panelological Era, 1937-1943).

Before we embark on this epic journey, I must make note of one communique that was left on my doorstep--two, in actuality. The first one is sweet; the second considerably bitter.

The first missive was from a tyke who lives on our block. She had heard about "the old man who lost his funny books," and she found it in her youthful heart to leave this message: 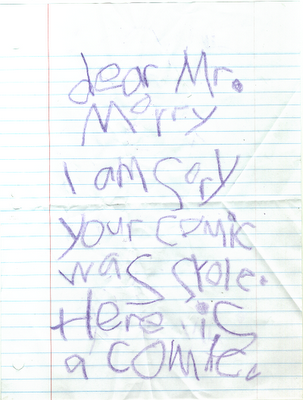 Attached to the message was a tattered copy of issue #17 of Little Dot's Aunts and Uncles. The thought was profound, and worth its weight in gold.

In the wake of this toddler's anonymous donation, a flurry of child artwork has appeared in our household--either left on our porch or solemnly delivered by grave tots, as was this hand-dispatched illustration: 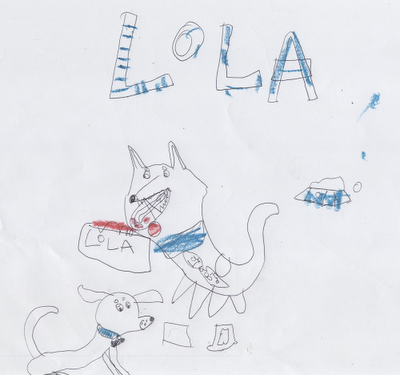 It is genuinely sweet of these infants to offer their gentle tokens of honor.

A more haunting and puzzling visual note was left beneath a plate this week at Dorrie's Diner. On the plate itself, inscribed expertly in ketchup and mustard, was a large ?

Beneath the plate was found this image, clipped from a retail sales catalog: 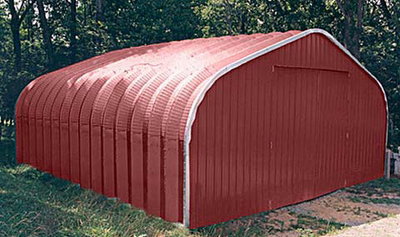 I know not what this image bodes. It is, I assume, a Quonset hut. Is this a clue as to the current whereabouts of the Former Pantheon's holdings? Or is this, perhaps, a foreshadowing of a future version of the Pantheon? I have joshingly titled this piece "Pantheon II." In the hopes that the InterNet shall provide some light or leverage, I share this quiddity with you, my dear friends.

Tongues clucked and empathy was shared on my recent visit to Killer Komix!, while on an errand of mercy to obtain two containers of Wondra, the highly effective gravy-making product. "Too bad," a fellow named Lyle said, as he inspected the condition of a Charlton war comic magazine. "Theft is the worst fear we face in this racket. Is that Sam Glanzman?" He held the magazine towards me for inspection.

I am no expert in post-1950 panelology, but the image bore a large, bold signature, colored red: MILFORD. I pointed this telling clue to Lyle, who was thankful.

The shop's owner, Bart, assured me that he, and other significant panelologists in the Tri-States area, were keeping out an eagle eye for any signs of my collection's disbursement on Ebay, Heritage Comic Auctions, and other means of illegal panelological transport.

Curiously, "Super Senior" has been curiously silent of late. No newspaper items have documented his actions--not since the last clipping posted here (and that was some time ago). "Sparks" Spinkle shares my deep concern for the fate of my collection, and has placed what does remain--including Marilee's former holdings--under padlock and key in his room.

Meanwhile, in Diner news, Dorrie has introduced a breakfast novelty that has taken our customer base by storm--Jaguar Stripe Hotcakes! Their creation was a "divine accident." Some powdered orange food coloring, left over from last Halloween, spilled into a batch of hotcake batter. Because of a reaction between the powder and the batter, it did not mix evenly into the goo.

It emerged, in the cooked cakes, as visually delightful bold splotches--rather like the pattern of a jaguar's coat! I profusely apologized to the waiting diner who'd ordered his "cakes," only to find he was delighted by the presentation. "Jaguar stripes!" he cried.

I thought better than to correct his faux pas--and, thus, a breakfast sensation was born! They taste no different from any average hotcake, but, as the advertising agencies have taught us, presentation is everything. I'll let you friends in on a secret: Jaguar Stripe Hotcakes cost $1.50 more than regular hotcakes. The cost of the colored powder is minimal. People are willing to pay extra for orange splotches on their breakfast cakes!

Raphael informs me that a few customers have asked that their scrambled eggs also have "jaguar stripes" added to them. Dorrie's Diner may well be "in the orange"--all the way to the bank!

And now, with no further ado, is today's stunning panelological presentation. Here is the 26 page original origin tale of the wondrous 1939 creation, "Shock" Gibson! Maurice Scott was one of the earliest graphic novelists. He preferred to tell his tales in long, rich doses. When a full page was required for an action, he took that space--without resistance from either his publisher or editor. His secret? I'll tell you after you feast on this entree magnificent! 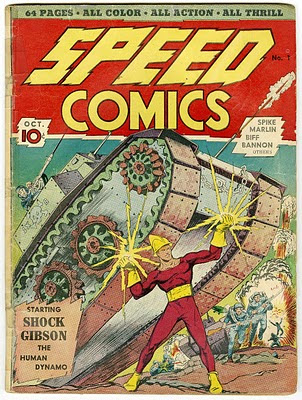 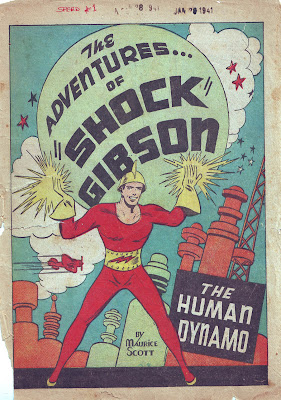 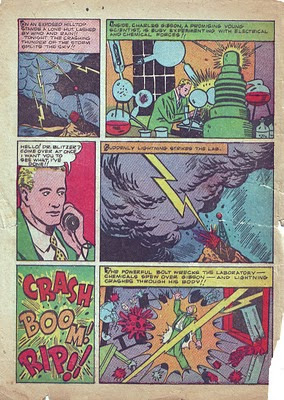 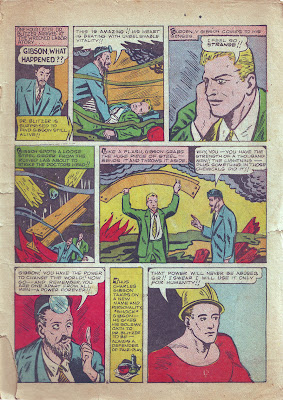 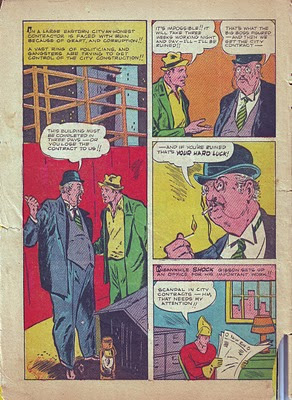 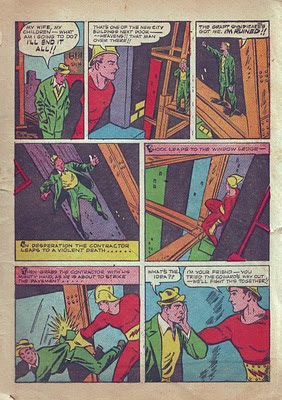 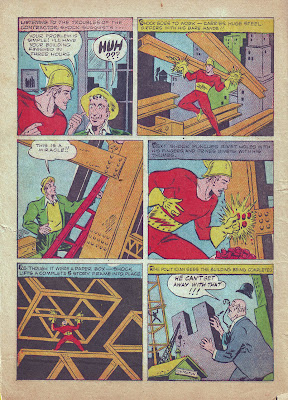 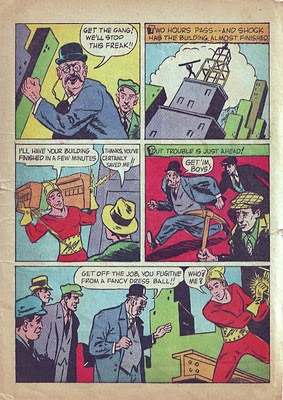 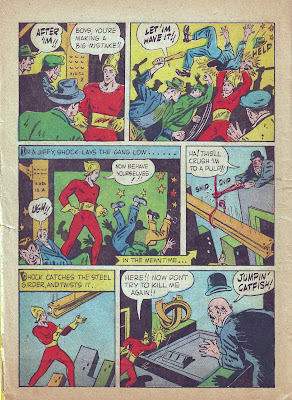 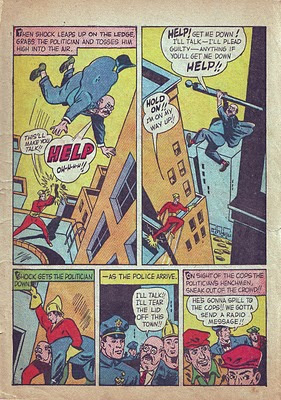 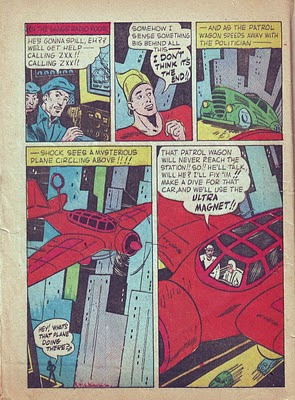 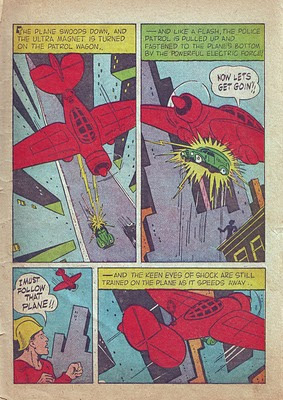 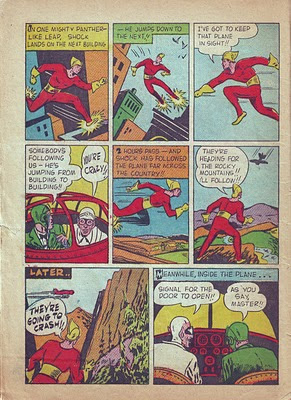 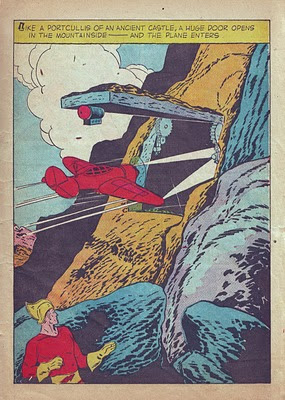 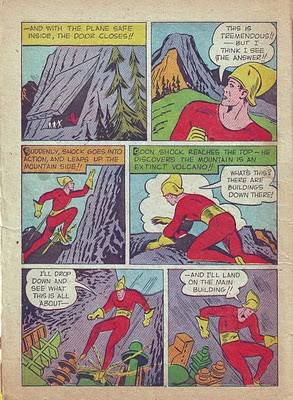 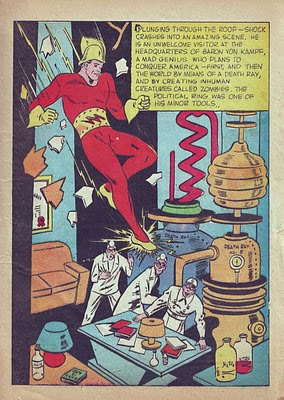 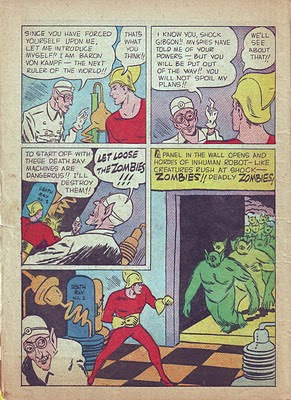 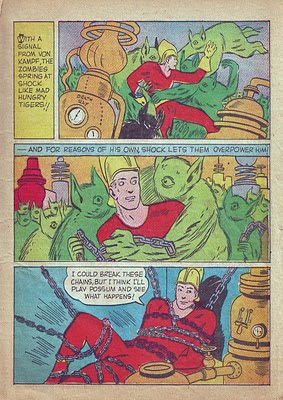 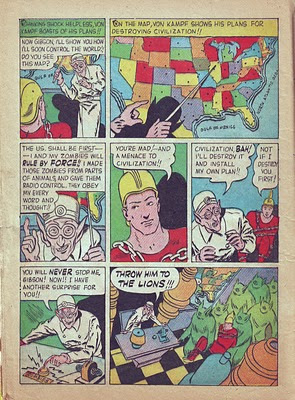 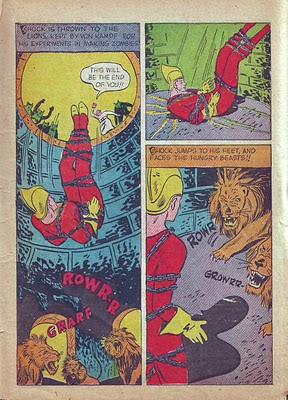 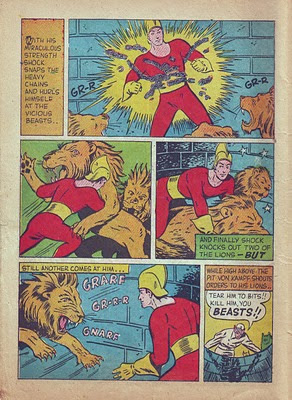 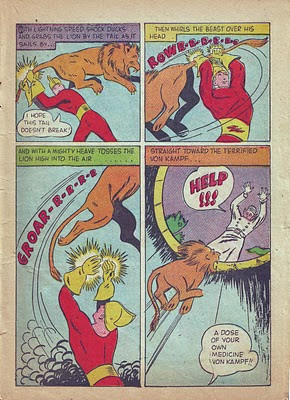 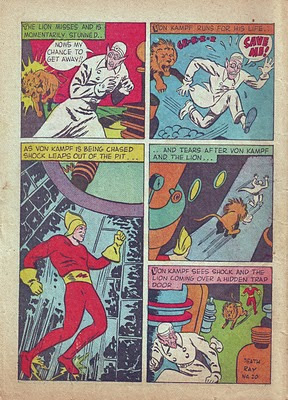 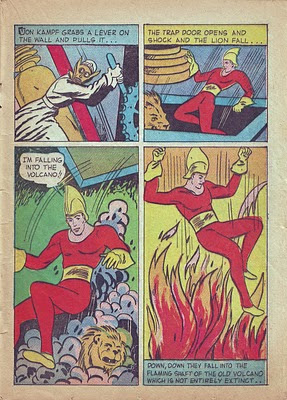 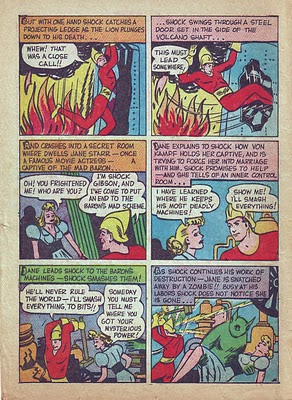 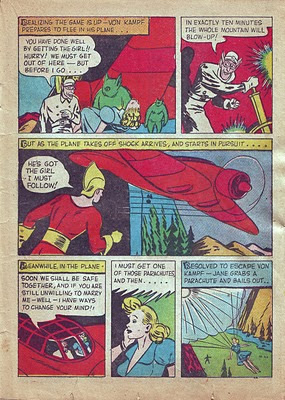 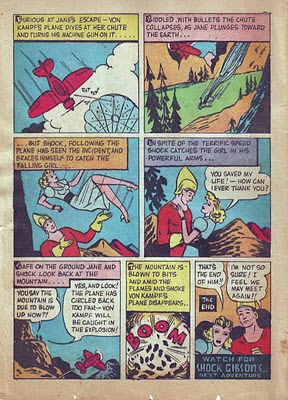 "Stunning... breath-taking...sweeping..." These and other laudatory adjectives still usher from the flabbergasted lips of the readers of Maurice Scott, some 70 years after the original publication of this early masterpiece of the GEP.

"'Shock' Gibson" engulfed almost half the pages of Speed Comics' premiere issue. This, in an era when most comic magazines sought to pack their pages with a quantity of various features. How--and why--did this title so go against the grain of the industry?

Maurice Scott's father owned the printing presses upon which Speed Comics was published! Young Maurice had a compulsive need to constantly draw. With the rise of the comic magazines, his father, Judson Scott, saw a way to channel his son's affliction into some extra income.

Maurice made up the stories as he feverishly drew them directly onto Bristol board with a #2 brush. He never knew when--or how--his improvised tales would end. Judson Scott put up 60% of the seed money for Speed Comics. He knew his son's intense, vivid work would appeal to the young reader. He was right.

The strain of sustaining this level of high quality work took a quick toll on Maurice Scott. His work became increasingly sloppier and disjointed. After achieving narrative precision and lasting excellence with this debut "yarn," young Scott lost his rudder.

While "Gibson" remained appealing to American comic book readers--retaining a typical 22-page length per tale--other Speed Comics contributors, such as Richard Briefer and Robert Powell, openly expressed their resentment at this nepotism. Both men often had only four to six pages in which to tell their panelological tales. Their umbrage is understandable, given the sharp, swift decline in quality that afflicted Scott's efforts.

Fate took its ghastly toll on the evening of February 3, 1941. Judson Scott, while inspecting the press run of a dog toy catalog, tripped on an electrical cord and fell directly between two three-ton rolls of paper. He was crushed flat. Bits of his remains dotted thousands of the catalogs, which went out into American homes the next week.

With Scott pere out of the picture, Scott junior was given his "walking papers." "'Shock' Gibson," which was owned, part and parcel by Alfred Harvey's publishing company, was quickly passed onto a new creative team. Judson Scott's World Printing Services was shuttered, and its presses sold to the New York Herald-Tribune. It's said that fragments of Judson Scott's remains still lingered in the press's massive gears, and found their way onto thousands of copies of the popular daily newspaper.

Maurice Scott may have been "a flash in the bulb," but he deserves to be remembered--and cherished--for his stunning masterpiece of the panelological form. One cannot debate the merits of this exhaustive saga. If this, indeed, be the lone issue of Speed Comics to remain in my collection, so be it. Subsequent issues have their undeniable merits, but only this first issue produced a monumental masterwork of this stripe.

Speaking of stripes, I have forgotten Dorrie's need for that orange powder. I must be off to Shakey's Grocery Guild for another bag of "NARANJA NOMBRE OCHO." (This is a Mexican food dye, you see.) Adois for now, and keep the faith, friend! Know that my collection--and panelological passions-- shall continue, no matter what!
Posted by Mason J. Moray at 11:57 AM