Friends, I am certain you’ve wondered of my whereabouts these past few months. I’ve often intended to “post” here, as this is my forum to the world at large. But, truth told, there hasn’t been time. I am sure you will understand once you’ve read the following. 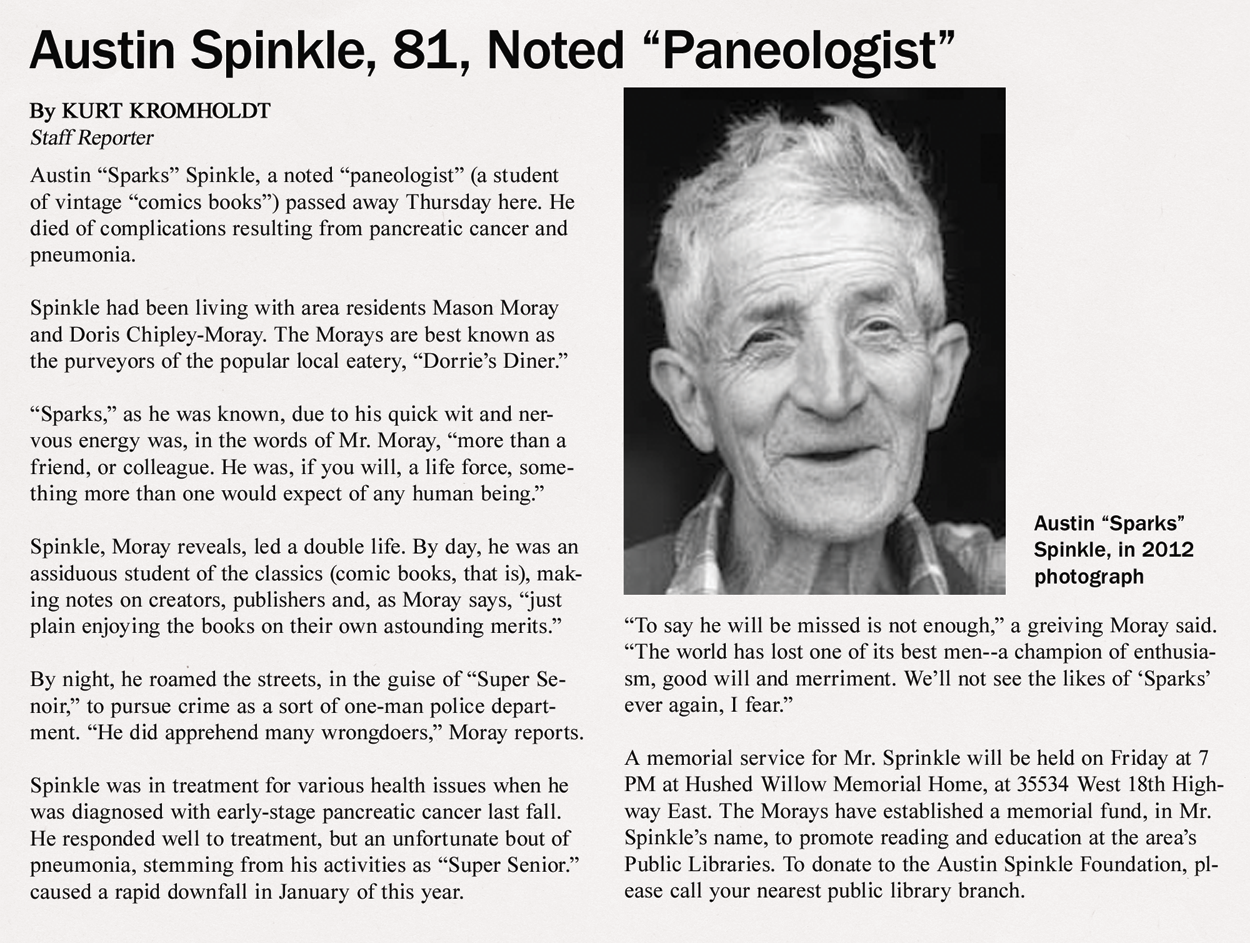 A deadly hush has settled over our house since the passing of “Sparks” Spinkle. Truth told, I knew this was coming, but I could not imagine it happening. “Sparks” was a human dynamo—constantly “on the move,” whether it be indexing my panelological archives at the New Pantheon, serving as a one-man advertisement for “Dorrie’s Diner,” sharing beloved movies, cartoons and TV shows with me in the den, or just talking—mostly about our shared passion of comic magazines, but also about the weather, politics, history and recent meals.

“Sparks” passed on January 29th, but only now can I bring myself to write these words. To know “Sparks” was to love him—albeit the latter could take longer with certain people. Dear Dorrie, who at first found him an “odd bird,” grew to appreciate and like him. He was of constant help around the house. As Dorrie said the other day, “before a glass could fall to the floor and break, he was there with the broom.”

I have had to put on hold my panelological passions, over the past several months, as I and Dorrie have cared for “Sparks”’ health in our home. A great variety of wheezing, clacking, thrumming medical instruments filled our guest bedroom. In part, their absence accounts for this awful silence as I write these words today.

“Sparks” was diagnosed with pancreatic cancer last October. He took the news in stride. “They can take your pancreas,” he said, “but darned if they can take your soul!” We were both deep in work for my sadly-postponed magnum opus, The Golden Era of the Art Panelologic: 1937 to 1942, when the news came, as a follow-up to a seemingly innocent physical “check up.”

Dr. Doynter caught the cancer in its earliest stages, and immediate treatments were applied to the area. In these treatments, “Sparks” was hooked up to a machine right out of a treasured issue of Science Comics, circa 1939, for three hours daily. What this vast machine did, I still do not know, but it enabled him to live a normal life for the other 21 hours of each day.

And live he did! Despite my constant council against it, “Sparks” continued his spree as “Super Senior,” patrolling the streets of our fair hamlet by night. Most of his forays were unexceptional, but he did prevent a carefully-planned robbery of a fur vault. Armed with his harmless-but-irksome aerosol cans of “Puppy Uh-Uh” and “Kitty No-Go,” he ventured downtown one November night, in search of after-hours parking meter violations.

A sudden flashlight beam attracted his attention and he crept into a nearby alleyway. There, he heard a volley of hushed voices. Down the alley he went, and through a door that had been jimmied open.  A group of 11 professional criminals were at work in the basement of Feller’s Jewel And Fur Box, our area’s leading store of such luxuries.

Their evident intent was to break into Feller’s un-alarmed fur vault, rob it of its morbid resources, and then burrow into the jewelry store to rob it of its riches.

Apparently, all was not well with this band of thieves. As “Sparks” later related to me, “two of ‘em was arguing about how they’d split the money. One guy, he wanted more than the others, and they had words about it. Started duking it out, right then and there. And, brother, that’s when I called the cops.”

Using a phone in the basement, “Super Senior” phoned in a tip to local police. Within minutes, the law had arrived. The fist-fight was in full swing, and it took the police three tries to get the attention of the thieves. All 11 were arrested. The police publicly thanked the “civic minded citizen” who informed them of this crime.

Had the thieves “gotten away with it,” they might have stolen three million dollars’ worth of assorted baubles and furs. All have been imprisoned. A court order demanded that Sid Feller install an alarm system for his fur storage vault.

“Sparks” did not claim boastful credit for this triumph. “Heck, anybody with two legs an’ a set of eyes coulda spotted it,” he said. Dorrie made a special victory meal to celebrate this, the final annal in the casebook of “Super Senior.”

It should, by all rights, have been the final annal. But, despite his assurances that he would no longer don the Pepsi sweatshirt, “Sparks” snuck out, one rainy December night, to do a brief street patrol. A light winter drizzle turned into an unexpected downpour, and my dear friend was drenched to the bone. He returned home and failed to properly dry himself off. He complained of respiratory discomfort the next evening.

Not even Dorrie’s “Jewish Penicillin” could help him. Pneumonia set in immediately. From that moment on, “Sparks” never again left his bed.

Despite this, he demanded that we continue on the book project. I spent many days seated beside him, in my office chair, as we examined fragile vintage comic magazines to determine their authors and artists. “Sparks” had an encyclopedia of panelological knowledge in his head. The loss of that “data base” is inestimable.

Each day, “Sparks” was, obviously, a bit weaker, but his vigor for life kept him going, to the bitter end. In his last days, he ate an inordinate amount of “Pecan Sandies” cookies. They were his favorites, and we could not deny him this death-bed treat. Dorrie and I are still finding mounds of the cookies’ brittle crumbs around the house. His appetite for them was insatiable.

I was with “Sparks” in his last moments on this earth. Dorrie could not be there; she had to run our restaurant, which continues in its “food truck” capacity, quite successfully. It is so much easier to operate than a “brick and mortal” establishment. But more of that matter another time.
“Sparks” took my hand and said these unforgettable words to me:

Mace, you’re a pip. Best pal a guy could ever have. You and the missus have made these last coupla years the best ones of my life. Now, don’t get all blubbery, Mace. You got to promise me you’ll keep up the good work. Keep these stories and comics alive. It’s up to you. Promise me you’ll finish that book.

I promised him. He smiled and squeezed my hand. “That’s a boy. Now how ‘bout a Sandie?”
I turned to the container of Pecan Sandies. One cookie remained. I removed it and turned around to give it to him. Feebly, he grasped it. I helped him guide it to his mouth. He bit down on the “Sandie” as he breathed his last.

It had been a “blue Christmas” in the Moray household, due to “Sparks”’ illness, but he insisted we celebrate the holidays with the ritual opening of my safeguarded eBay purchases. How he quivered with anxiousness as I opened each parcel! How he beamed with joy as we examined each new addition to the New Pantheon!

One unlikely purchase truly sparked “Sparks”’ interest—a copy of Manhunt Comics #6, from the impossibly late date of 1948. “Sparks” and I consider the Manhunt title to be the final vestige of panelological greatness—one last burst of the primal energy that made “the comics” so vivid, so vital.

Of especial interest was Fred Guardineer’s “Space Ace” feature. “Sparks” read the story on the spot, and pronounced it “the corker to end all corkers.” Thus, in memory to Wallace “Sparks” Spinkle, and to his ever-lasting legacy on the fine art of panelology, I present this “corker” for your enjoyment. Read it, and think of “Sparks.” His work—and words—shall never be forgotten.

And this I promise you, friend—despite death threats, despite the heartache I feel, I SHALL complete and publish my book. Verily, my comrade, I shall make you proud!

I shall resume regular posting here shortly. I want to keep the “good word” alive and well, for those of us who still believe. 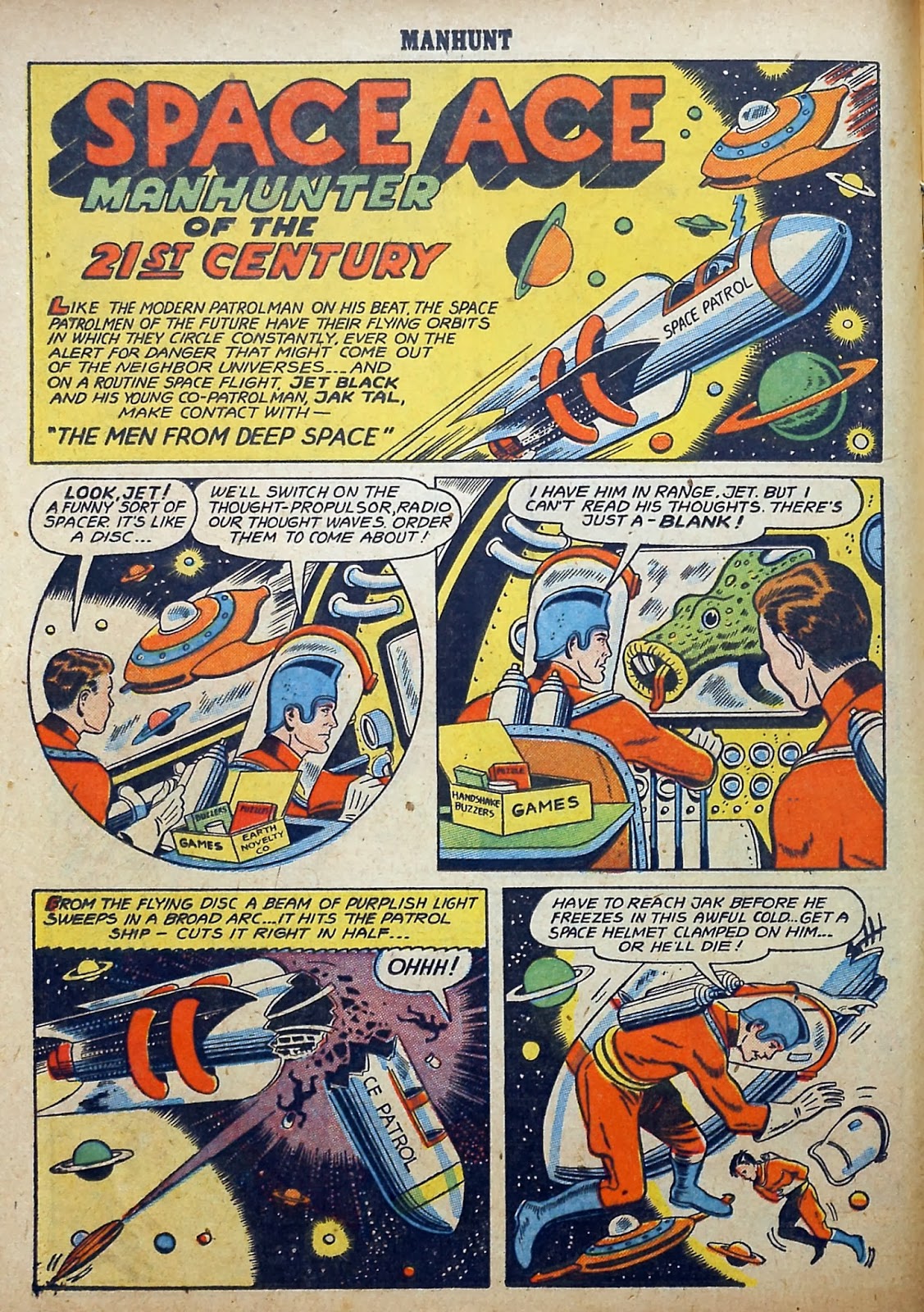 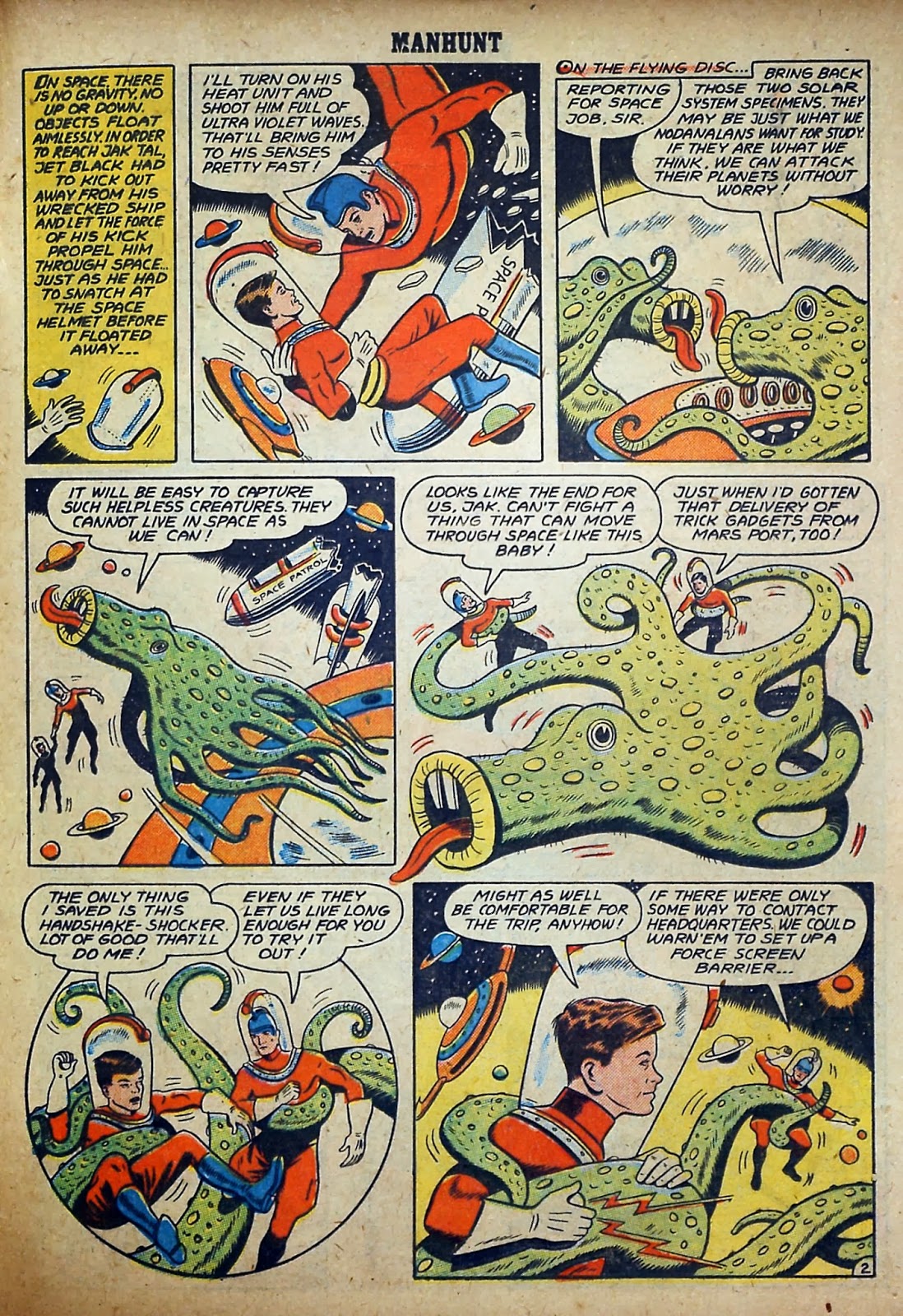 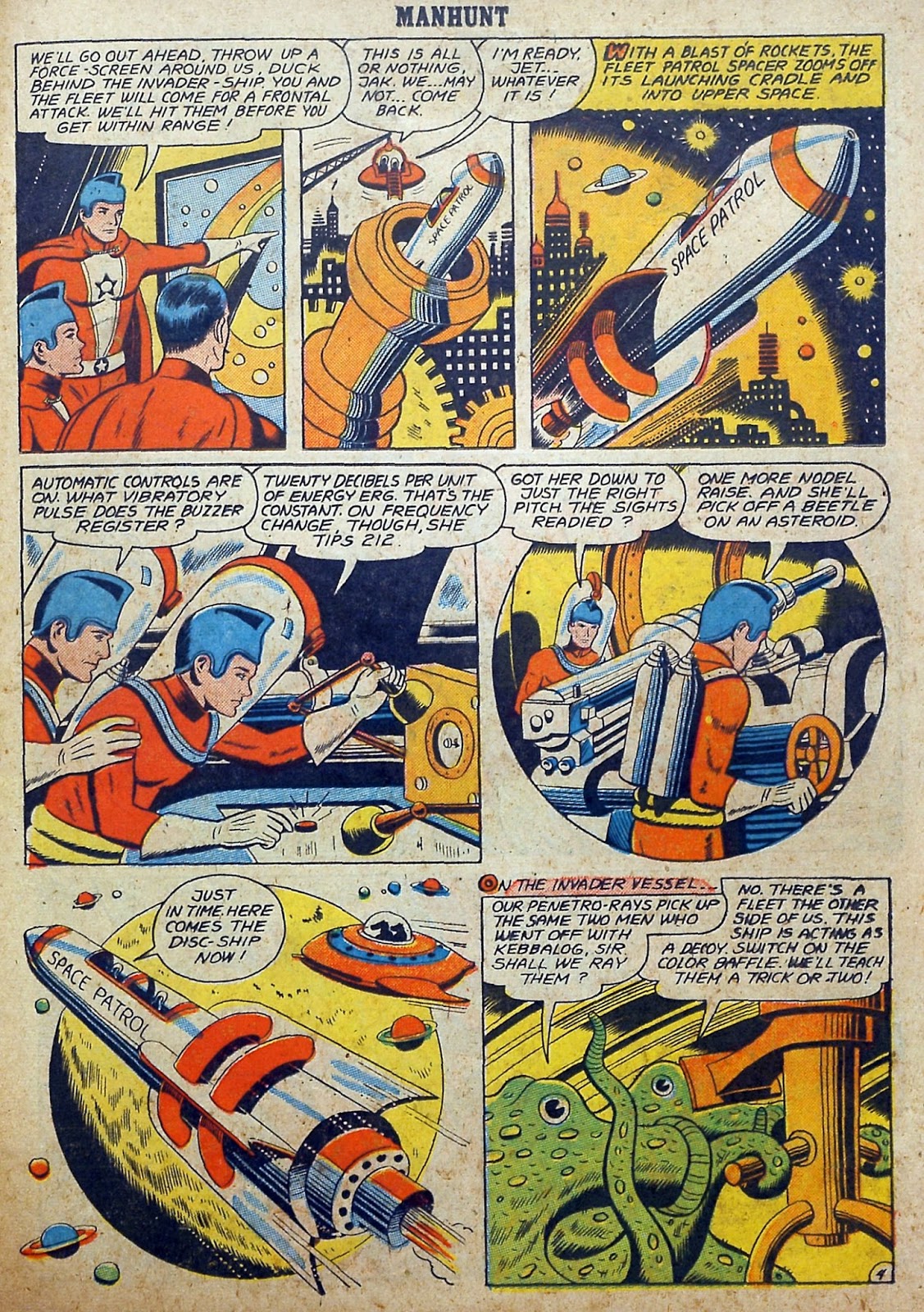 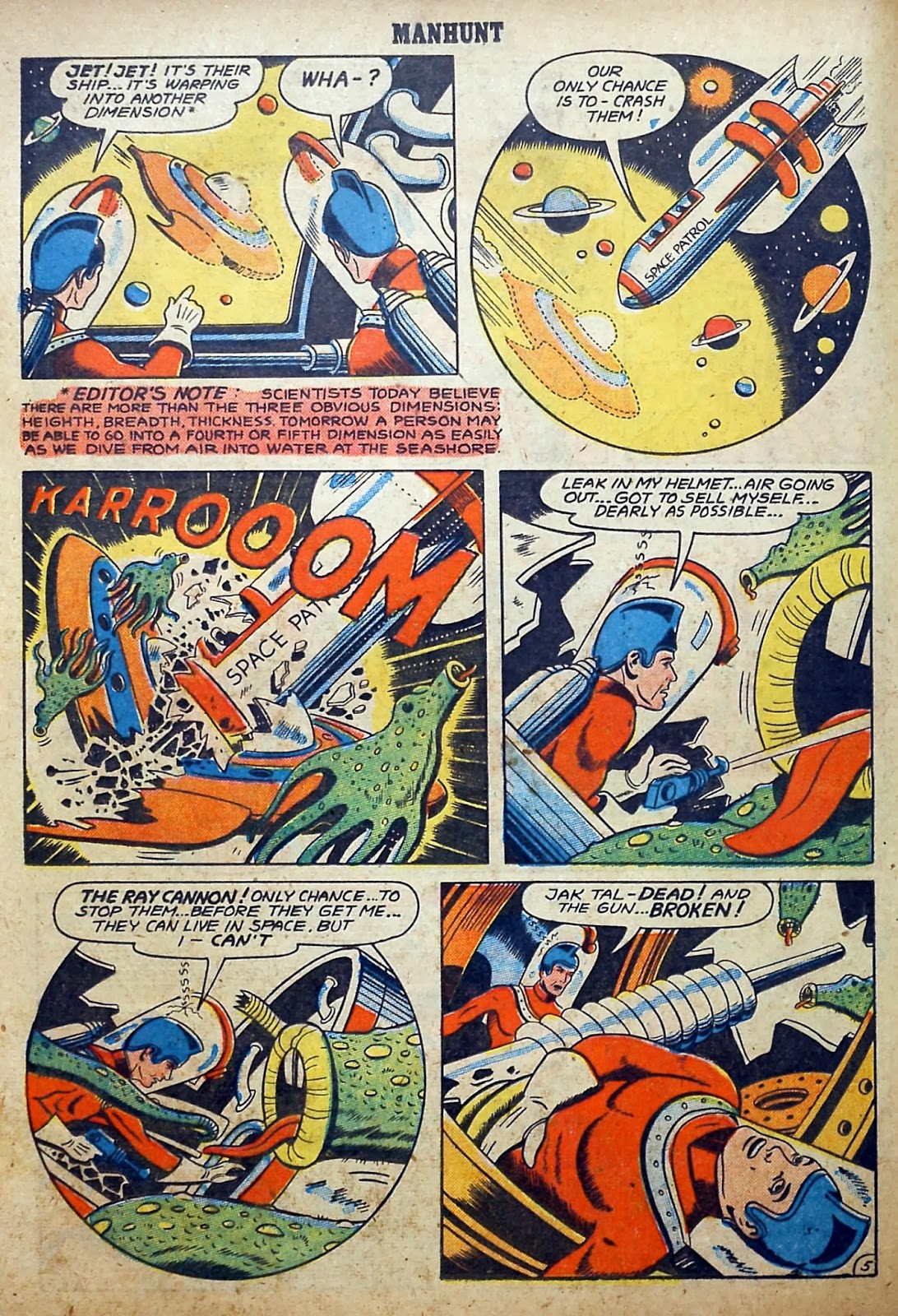 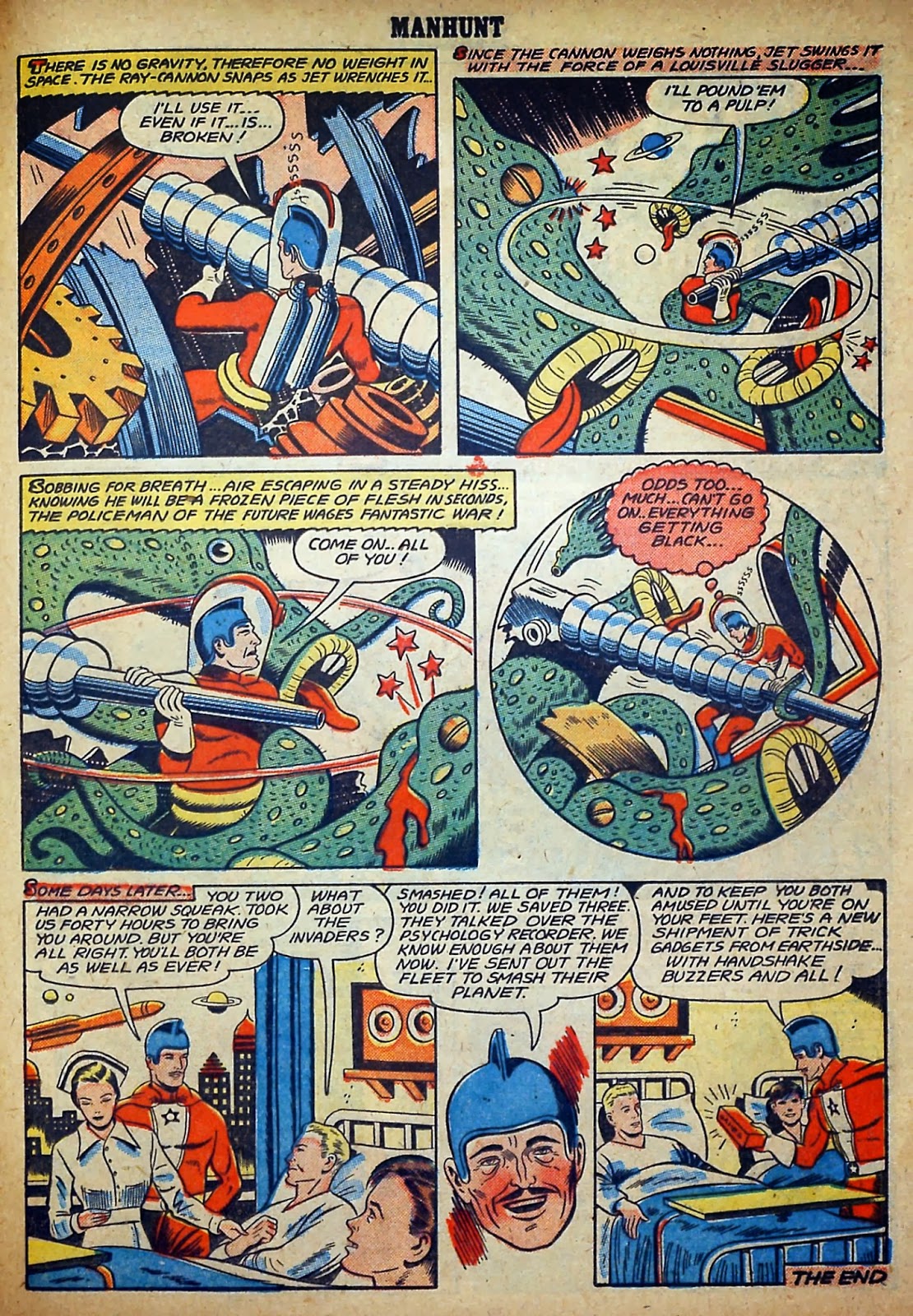