'Tis with great sorrow that I return to the bloggnhg scene. This article, from the local newspaper, tells the story with grea t clarity: 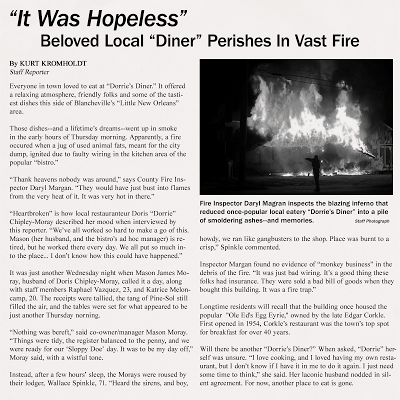 This dreadful night still reverbates in my thoughts. I am every so grateful that none of us was hurt, and that, yes indeed, we were "insured up the yazoo," thanks to the relentless advice of our next-door neighbor, Burt Liffler. It was imperative that we doubly insure our home, during the time that "Dorrie's Diner" occupied its first spot.

When we moved to what we thought our permanent location, the insurance contract was transferred, with additional "riders" to accomodate the bistro's placement in an actual, "standing-alone" place of business.

We are awaiting the red-tape of the insurance inspector's paperwork to "wrap up," but we have been assured that we will be nobly recompensed. It  has been intimated to myself, in a "hush-hush" private communique, that our payment may exceed the amount of money we have put into both incarnations of the "Diner."

So rest assured, dear friends, that we are not in "the harmed way." Rather, we are on "comfy street," despite the horrors that still occasionally jolt us out of a sound night's sleep.

We are each thankful for what didn't occur. Dorrie is relieved that no one was in the Diner when the accursed fire occured. I am, of course, glad of that too. 'Tis double relief for me. That fateful night, I had almost forgotten to fetch a parcel of precious comic magazines that had sat 'neath the front counter for a few weeks.

Among the items in the archival quality box were several issues of what I consider the ne plus ultra of the Age Panelological--the Fox Features title, Science Comics.  It was, quite simply, too good to be true. While more pedestrian Fox titles flourished, Science was axed after eight mere issues.

There will not, I'm sad to say, be any panelological gems in today's posting. I  have been so busy with research and organization for my ongoing book project that any time spent with comic magazines has been devoted to their close scrutiny and study.

While "taking a breather," I stopped by my local comics emporium, Killer Comix!, and chatted with its owner, Bart Jaffney. In our talk, my passionate testimony of the wonders of Science Comics moved him to demand an audience with the rare issues. He assured me he would purchase a new pair of Farrago Research Gloves (the finest handling gloves for contact with aging acidic papers), and examine them in my presence.

Poor Bart! He spent 15 minutes paging through four issues. He uttered an occasional "huh!" or "huh?" before adjudging them as "pretty cool." I could tell he was just humoring me, and that his modern comic magazines, which he vends by the carload, had blurred his vision for the better things.

I cannot criticize him. It would be as if I had asked a steady consumer of store-brand grape "pop" to tender his opinion of subtle fine wines. They might seem bitter and unpleasant to his palate, so used to carbonation and the chemical artistry of the grape flavoring.

Similarly, were you to place a platter of fine Sherpa cusine before me, I might moodily pick at it, perhaps taste the corner of one seasoned potato, and deem it "okay." We all have different tastes, and bless the world for this!

Dorrie and I have been in coupled counselling. We are part of a group entitled "Survivors of Fire: A Healing Community." The group meets twice weekly in the "Bronson Room" of Chip's Broiler, a fine-dining establishment located downtown. The leader of the group, Melinda Marx, speaks in a softly lulling voice that puts me under within 15 minutes' time.

Parking is iffy, and I am often rudely awakened with a nudge of "the wife"'s elbow and asked for my input. I personally am no survivor of fire--I stood within 300 feet of the blaze, in my bathrobe and house slippers, but that, to me, does not comprise "survival."

Were there a group entitled "Observers of Fire," I might more boldly partake of the twice-weekly event. It seems helpful for Dorrie, as she seems very upset at the demise of the Diner. Perhaps I take the events too much in stride, as a panelologist.

We "men of the page" are accustomed to the dashing of dreams. That lone issue that would complete a run remains just out of reach; one cup of water, coffee or cola can destroy a prized periodical in a second's time; if abused in their first years of life, these comic magazines are slowly dying, browning and flaking away before our eyes. We are, thus, more incliged to "wax philosophical" about loss and tragedy.

The world gives... and it also takes away. But it does keep giving. As a result of the fire, we will  be able to take a vacation to Lake Tahoe. There, Dorrie will sunbathe, dip herself in the chilling waters of the great deep Lake, and play volleyball with complete strangers. I will relax in air-conditioned splendor, as I continue my ongoing research for my magnum "opus."

As well, I have been alloted 3,000 dollars in "madness money," to invest in more vintage comic magazines. I plan to purchase replacement copies and condition upgrades of several key issues in the New Pantheon.

It just happens that a comic-book convention will be held near Lake Tahoe, on the weekend of the eight-day stay we have booked. I hope to acquire some of these gems in-person. I am accustomed to ebAy, and find it a suitable conduit for new purchases. Still, nothing can replace the thrill of a first-hand "find." The sudden sight of its bright colors, its alluring protective sheath, the shock of its hand-lettered price tag,and the resultant "dickering" with its vendor, are all near and dear to my heart and soul.

While revisiting some of my early "Fanzine" efforts of the 1960s, I encountered this poem I wrote, at age 19. Its sentiments are as true to me now as they were in 1970, when I first penned it. (At the bottom of the page is the end of the last interview with , who was an inker of Western comic magazines in his final days.) 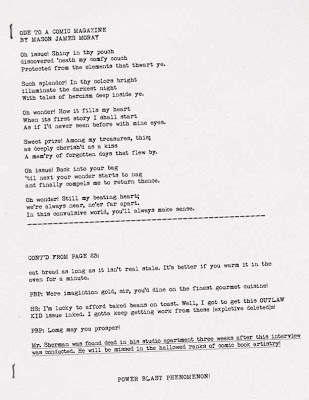 I fully intend to comtinue this blog, and after our return from Lake Tahoe, I shall no doubt have much news to report. For one thing, we've entrusted the household to "Sparks" for the duration of our vacation. I trust this structure will still be standing upon our return!