The Last Straw: In Which Desperate Measures Are Taken

Friends, I am tired of this inestimable, gnawing weariness. Tired of awaking in the darkest hours before the dawn, gripped with anxious fear. My worry for the fate of my treasured collection distracts me from the simple workaway pleasures of daily life.
Earlier today, customers at Dorrie's Diner became exasperated with my preoccupation. "Move it, doorstop!" one old gruff gent crowed at me. I was, indeed, standing in front of the door, blocking his exit. I longed to see again my near-complete run of the Fox Science Comics... to smell the fragrant pulp paper stock of the Nedor issues of 1941... to view the stunning early work of Vernon Henkel.
Of course, none of these things are communicable to the "Lay Man." To them, "funny books" are detritus on the trash-heap of life. Far inferior to their preferred TV "sit-coms," trashy best-seller novels, their video-games, X-Boxers and such.
I'm singing to the choir with these grousings, I'm all too aware. It would appear that my collection is intact and safe, in the mysterious hands of whomever thieved them from the Former Pantheon.
Eerie clues continue to come my way. Last week, I received a post-card (which I have since burned in a fit of pique). Scrawled across it was the enigmatic message PS -- ROADWAY -- A117, followed by a row of "smiley face" stickers.
The next day, another card arrived, which simply stated: GOT THE KEY? GOT THE CLUE!
That card is being held by the local police, for finger-print sampling and such. I do, indeed, have that curious key. I carry it with me at all times, even when I sleep.
Late last night, a feeble tapping roused me from uncertain sleep. Dorrie was "out with the lights" from a busy day's Diner work, followed by a rousing Scrabble play-off at her church. She didn't notice that I left the bed, donned my robe, found my slippers, and shuffled off towards the front door.
I peered out the front window. I saw shadowy figures moving in the distance. By the time I unlatched, unlocked and opened the door, they were but faint foot-steps in the misty night. On the front porch was a shocking surprise-- box C-14, its contents (a solid run of early Speed Comics, plus a few issues of Sensation and Shield-Wizard) intact!
Taped to the underside of the box's lid was a Manilla envelope. A loud tick issued from within. Fearlessly, I tore open the flap. A small desk clock fell out. Tied to it was a distressing note: 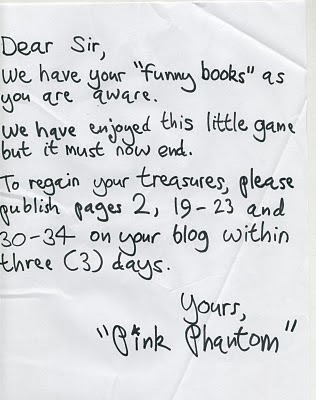 I am powerless to defy them. I apologize for the remainder of today's post. These are, quite possibly, the ugliest, most terrible comic-book stories ever perpetrated on a miserable public. The comic magazine in question is an early effort of the moribund Charlton imprint: A dreadful magazine entitled Jack in the Box Comics.
The fiends deliberately picked these stories, as they go against my good taste and intelligence. If it means the return of my treasured collection, then so be it. But note, you scoundrels, that I only do this because I must.
Here, then, is a selection of execrable stories illustrated by one "Lee Sherman," from issue 15 of this highly regrettable comic magazine. 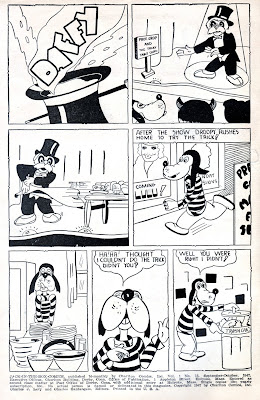 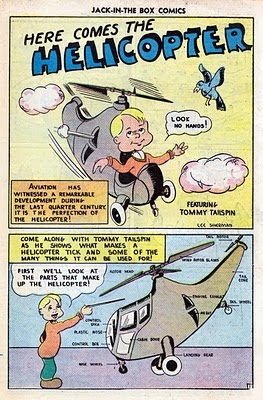 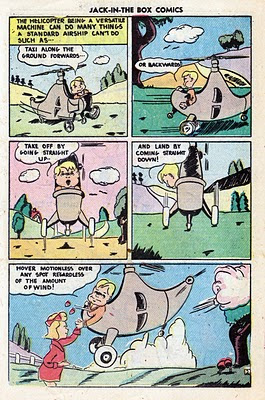 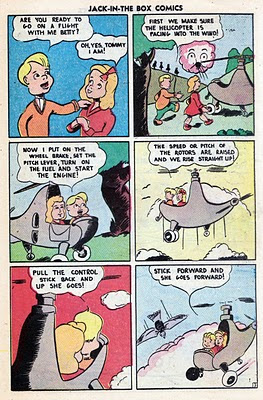 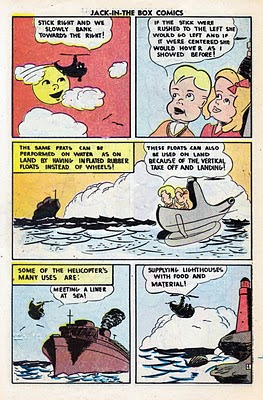 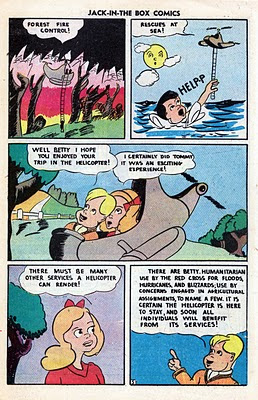 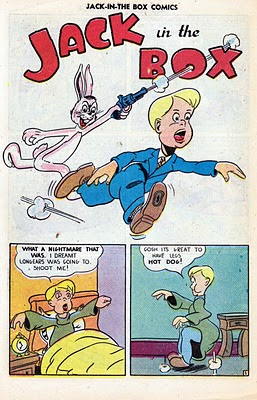 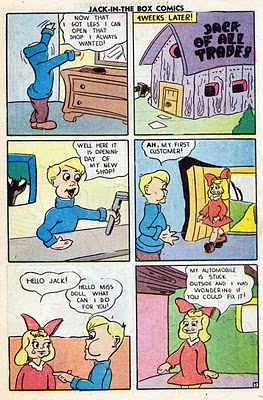 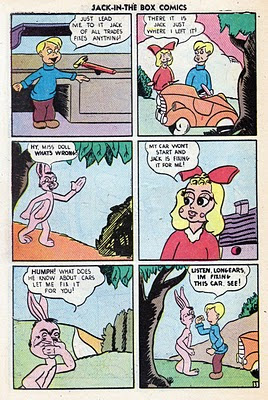 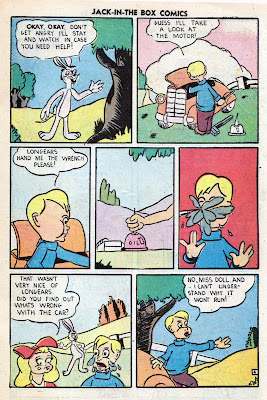 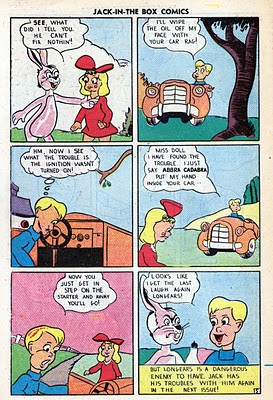 I hope you are happy, you fiends. To my true friends, I apologize profusely. I do not publish garbage on this "blog"--only the utmost best in panelological material.
I trust that, by fulfilling my end of the bargain, that I shall be in possession of the comic magazines (which are, after all, rightfully MINE) and that this wretched, brutalizing episode shall fade into distant history.
Tell me, you monsters--which door does the key open?
Posted by Mason J. Moray at 4:24 PM 3 comments: