To all my dearest friends on the InterNet:

I regret my continued infrequency on this “blog.” It cannot be helped. The continued, growing success of “Dorrie’s Diner” has, quite literally, transformed my life.

No longer am I the carefree, devil-may-care retired panelologist. I have a new career—one seemingly thrust upon me by the cavalcades of fate, but a role I have come to cherish, and to take seriously.

Friends, the bistro business can be a thankless grind. We exist to serve one of mankind’s base needs—the desire to eat. When you or I are hungry, our concerns of wealth, fame or art go out the window. All that matters is setting down to a good, solid meal—and consuming same to our satisfaction.

Thus, we as expectant eaters do not necessarily represent hhumankind at its zenith. The hungry Hono Sapiens can be grouchy, cross, gruff or impatient. Show me the food, he seems to say, and then we shall conduct ourselves with civility.

Those who know to ask for it can receive it “fuerte style,” with a legion of finely diced jalapeno chunks, or “a la Norwegian,” in which the sandwich is served refrigerated.

Needless to day, Thursdays are boom business days at the Diner. Seemingly, no one in a ten-mile radius can resist the siren song of these two-fisted sandwiches. All day long, I hear the spatter of oozing saucy meat, as it is squeezed out of the bread and trickles onto the diner’s plates, our laminated tablecloths, or to the floor. The latter poses a slippery hazard which only builds as the day grows longer. By closing time, the slick tile floor is as deadly as an ice field.

But I difress. Our Thursday customers are a ravenous lot. I expect they awake with visions of “Sloppy Doe” sandwiches, drizzling and tangy, hot and punguent. By lunch time, these folks have worked themselves into a mood. They slam the door open, scowling and tense. “Where’s a table?” they demand. “And bring me an extra bib!”

To handle a “Sloppy Doe” is to risk the welfare of one’s clothes. Each bite sends tendrils of juicy, blood-red sauce onto the eater’s face, hands, shirt, pants and shoes. Thus, in order to sustain a robust business, we have purchased several thousand disposable “body bibs” from a New Jersey wholesaler.

These “body bibs” are not unlike those travel bags one uses for suits and other garments on hangers. The user steps into the “body bib” and then zips it up to his or her chin. Their arms exit through one-size-fits-most arm holes. They then don arm-length paper gloves, which we purchased from a supply house in Oregon. MMM MMM!, they read. WHERE’S THE CHOW? Apparently, there is a national need for pre-printed food gloves. We are part of that chain of supply and demand.

Raphael is in charge of helping the infirm and elderly don their “Body Bibs,” and of making sure they remove them after their meal. The bibs have no legs, and sated patrons have attempted to leave the premises hopping like some giant earthworm in an old cartoon.

It bears repeating: our Thursday patrons are a cross lot! Until the sandwiches appear before them, they seem capable of homicide. Their heavy fists pound the tables. Napkins and toothpicks are nervously removed from their dispensers and destroyed via fidgeting. The air is a chaos of tuneless humming and whistling. These fine folks are here to eat, and they want their sandwiches in the worst way!

All I can do is smile and serve. We use no menus on Thursdays. No other entrees need be prepared.

The Diner resembles a bloody battlefield after closing on Thursday afternoon. Silently, grimly, Raphael, Katrice and I clean up the aftermath. The pile of used, discarded “body bibs” and those merrily-printed food gloves is enormous. I have a special “Thursday suit” that I wear to dispose of them. Into extra-large garbage sacks they go. Those are loaded into the Prius and chauffered to the city dump.

The car reeks of “Sloppy Doe” scent for the next several days. Needless to say, none of us who work at “Dorrie’s Diner” have any desire to bite into one of those popular sandwiches! Raphael has come to resent the Thursday sandwiches. He puts on a brave face, as he helps the elderly into their body bibs and watches our patrons plow into the drizzling slabs of bread, sauce and meat.

Under his breath, he spoke a truth in his native tongue:

Enough of that topic! I thank you for letting me get that out of my chest.

What of Christmas, you may ask? I sorely regret not continuing my annual tradition of the holiday super-posting. I was laid up with an ear infection for the entire holiday week. I know not where it came from, but it so affected my sense of balance that I could not walk. I could manage a stagger to and from the bathroom or kitchen, but that was it.

I did spend Christmas Day out of bed, but stayed in my pajamas, robe and slippers the entire time. We had a small, pleasant holiday meal, with “Sparks” Spinkle, Raphael, Katrice and Burt Liffler. “Ray-Don” and his “companion” were out of town, to attend some family event in Illinois.

I asked Raphael about his friend, Henri, who, as you’ll recall, partook of our memorable Thanksgiving soiree. Raphael’s normally jolly mood grew dark, and he picked at his food. “It is best, Senor Moray, if we don’t speak of Henri today…” No more was, or could be, said of the subject.

Raphael soon brightened again (and who could not, given the lavish spread set before them by my dear wife?). Afterwards, we gathered in the living room for an exchange of gifts. For Raphael, I prepared another package of vintage “revistas,” which he accepted with glee. Dorrie got Katrice a gift certificate to Ross Dress-for-Less, which I think she appreciated.

My purchase for Dorrie was a year’s subscription to a local spa, where she can go anytime to be massaged, steamed, lotioned and sit under a sun lamp with cucumber slices over her eyes. Women love that sort of thing, and Dorrie is no exception.

“Sparks” insisted that we not “go to any fuss and bother” over him. Having a home, he said, “is enough gift for me.” Nonetheless, I purchased a new Pepsi sweatshirt for him. His prior one had gotten mildewed from being stored under the front steps. This is actually a “hoodey” shirt, complete with a kangaroo-like pouch in the front. I am sure this garb will be described in the local press for years to come.

As for myself? I had a pleasing pile of vintage comic magazines, accrued over the year and salted away by Dorrie. I tend to forget what I’ve purchased, so the gala end result is always a pleasant surprise. My panelological needs grow fewer as the years pass, but no less meaningful.

By far, the crown gem of this lot was a beautiful copy of Sure-Fire Comics number three—on the top of my want list for years! This magazine represents the early peak of the panelological art, friends—each and every story is a blazing gem!

I’ve only time to post one tale from this splendid tome. And here ‘tis—Agent X, The Phantom Fed, as written and drawn by Burt Guthries. Enjoy, friends, and drink deeply of this vintage brew! 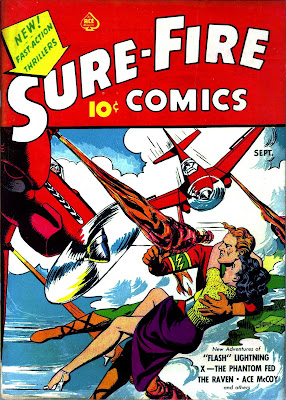 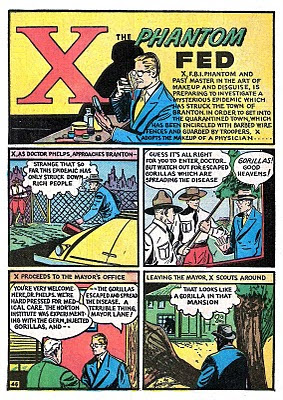 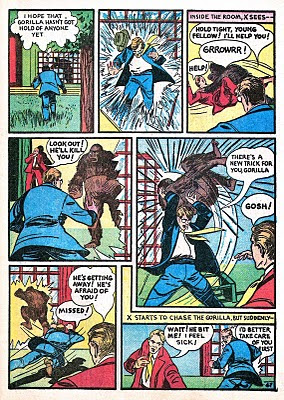 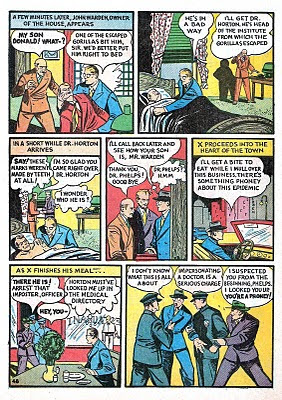 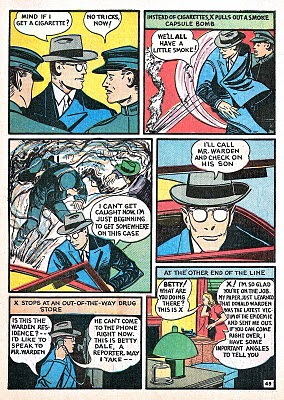 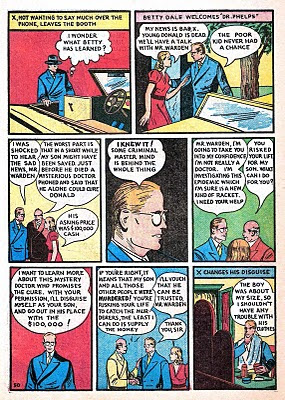 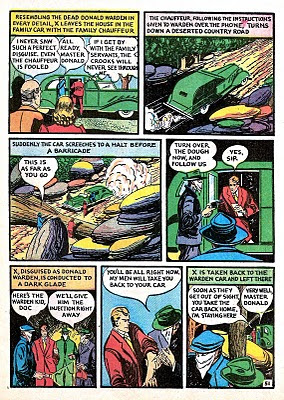 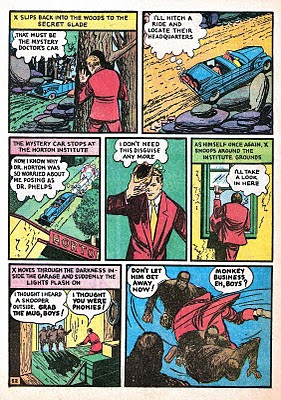 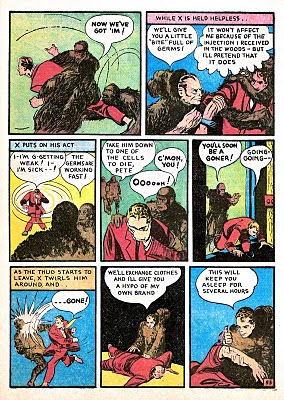 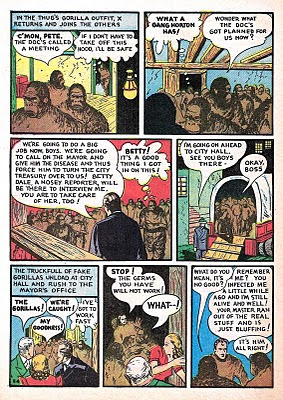 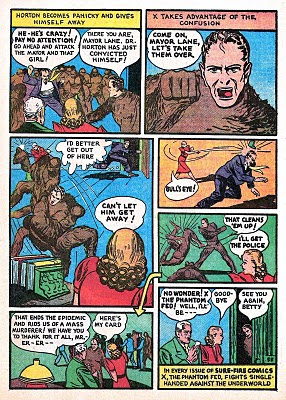 I shall give you a few moments to collect yourself, in the wake of this blinding tale of brilliance. How I gaped and gasped as I first read it! You see, we experienced panelologists expect little of these non-superhero features in early comic magazines. They were, by and large, holdovers from a timid, pre-heroic age of popular fiction. They continued mainly because editors were lazy, and simply wished to fill the pages of their publications as effortlessly as possible.

But what of the creators who continued these lesser features, watching on the sidelines as their peers depicted the fantastic realms of heroism and fantasy? Simply put, they believed in their work and its worth.

Burt Guthries was a reluctant panelologist, but a voracious one. His career began in the 1910s, as a sports illustrator and courtroom sketch artist for several New York and Newark daily papers. Guthries, a clasically trained portrait artist, had embedded in himself the perfectionist tendencies of a schooled fine artist. As a result, he could be painfully slow.

Guthries was fired from one Gotham paper during the landmark trial of Bruno Richard Hauptmann, the kidnapper of aviator Charles Lindbergh's child. Guthries spent so much time on a finely detailed portrait of the fingerprint expert that he missed capturing images of Hauptmann, the case's judges and attorneys, or Lindbergh himself.

Guthries drifted to the pulps in the 1920s, where he had to learn to work faster. He developed a technique in which he pencilled with his left hand and inked with his right. This allowed him to double his work-rate—and thus match the speed of the average artist.

As pulps began to experimentally feature original comics material, Gurthies transitioned to the arts panelological in the 1930s. His knack for drawing people, cars and buildings made him a success in this burgeoning field.

Guthries stuck with the genre of G-men, T-men and Federal agents. As he perfected his two-hand technique, he became the "go-to man" for this type of filler material. "Blake Barton," "Trump Tolliver," "G-Man Garson" and "Treasury Squad" poured from his drafting table.

Scorned by his younger, less skilled colleagues, Guthries preferred to work at home, where he could prepare his minor tales in peace. He scoured the headlines for material. In the 1930s, there were plenty of federal-man antics on the newspaper page.

One March, 1940 story particularly intrigued him. It told of G-man Chet Weldon, who donned a bear skin, at a remote hunting lodge, to startle and capture wanted racketeer Butch Maddron. Weldon's "bear scare" created a sensation in the world of government agencies, and was much-imitated. Agents donned the skins of wildcats, lions, tigers and other man-sized animals to entrap and baffle wanted criminals.

Thus, Guthries' fact-based tale, which you have just read, is really not so fantastic. All its elements are viable, believable and feasible. Their hearty combination—somewhat like the vivid array of ingredients in a "Sloppy Doe"!—creates a superb blend of the factual and the fantastic.

Alas, Guthries' masterpiece was ignored. It was wedged into the back half of this comic magazine (although it received second-billing on the cover!) and overwhelmed by the phantasmagorical exploits of its co-inhabitants. It would prove among Guthries' final panelological works.

Sometime in 1941, Guthries quit the comic magazine "racket" and became a full-time fine artist. He specialized in harbor scenes. This passion—and his latent perfectionism—cost him his life. One spring morning in 1948, Guthries set up his easel and chair on the precarious cliffs overlooking the harbors of Maine. The scene he painted was to depict a weathered lighthouse, with a sun-withered rowboat.

The intricate textures so intrigued Guthries (who worked with binoculars) that he ignored the beginnings of a landslide. The artist, and his final work, were overwhelmed by seismic irregularities. He was inextricably buried under deep mounds of shifted earth and rock. His final, nearly-completed work lay, safe and sound, atop his final resting place. Unfinished Lighthouse and Old Boat is regarded as a masterwork of quiet, understated realism. You may find it elsewhere on the InterNet.

Well, friends, I must return home. It's getting late, and I've enjoyed my visit to the New Pantheon. 'Tis time to file my new treasures and enjoy an evening meal. Who knows what panelological thrills this new year holds for us all? In the meantime, may health and joy be yours in every way!
Posted by Mason J. Moray at 9:36 AM 1 comment: